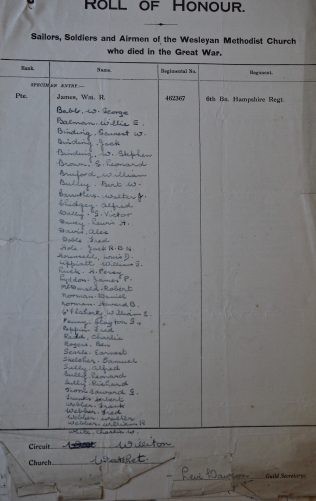 The Wesley Guild Secretary in Watchet supplied a list of thirty-nine names. When the local community were asked in 1920 how they wished to commemorate their war dead, they chose to have a memorial sports field, so this document may have been the only record of those who fell.

In 2012 a local group decided to commission a war memorial, which was dedicated on 30th June 2014. Further details may be found at: https://www.warmemorialsonline.org.uk/memorial/178030/

The memorial lists 42 names: all the above appear in one form or another. The names as listed on our document may be assumed to be those by which they were known in life. The three names not listed in 1928-29 are

The question is whether Levi Dawson supplied a full list, knowing they had no other local memorial, or whether Wesleyan Methodism was so strong in Watchet that over 90% of the fallen were Methodists. To this day there are also Anglican, Baptist and another Methodist (ex-Bible Christian) places of worship in the area.