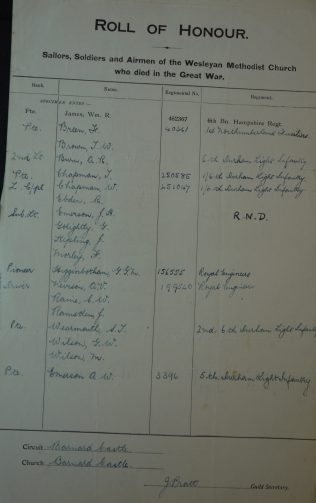 Trinity Methodist Church in Barnard Castle was the main Wesleyan chapel in the town, and the congregation decided to commemorate their 17 war dead, and give thanks for the service of the 88 who returned by installing an organ, with a plaque. Both were unveiled on 14th April, 1922. The plaque is now in the church porch. Full details may be found at http://www.newmp.org.uk/detail.php?contentId=6381#listlink

Seven years later the Wesley Guild Secretary sent this document to Catterick and, as we shall see, recorded that another member of the congregation had succumbed to his injuries.

R. Ebdon does not appear on the town war memorial, in the grounds of the Bowes Museum, and cannot be matched with the casualties recorded by the Commonwealth War Graves Commission. He may be Robert Ebdon, born in 1895.

Driver John Thomas Kipling 240388 Royal Field Artillery died on 5 December 1918. He is buried at Bowes, four miles from the chapel, so presumably died there.

J. Ramsden  There is not enough information to identify this man

Pte. Arthur Waldo Emerson 3396 5th Bn. Durham Light Infantry was born in 1897 and died in Barnard Castle in the second quarter of 1922, shortly after he was listed on the plaque as having survived the war.