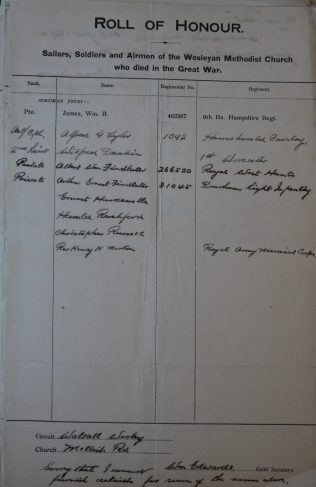 Ten years after the event it is probably not surprising that the Guild Secretary was unable to furnish all the details of some of the men. In the following list information found from the Commonwealth War Graves Commission is enclosed in square brackets.

Two individuals are of particular interest.

Albert Findlater did not die until 22nd July 1920, and is buried in Walsall. Although he survived the war, he was regarded both by his church and the Commonwealth war Graves Commission as a casualty.

Rev. Henry Hall Norton was the minister of the church from September 1914 to January 1915. He had only just finished training for the ministry and this was his first and only station. Although exempt he enlisted in the R.A.M.C. and died in Alexandria (Egypt) on 27 January 1916, of wounds sustained in the evacuation from Gallipoli, aged 27. A number of ministers who had also enlisted in the R.A.M.C. subsequently became chaplains to the forces. Norton is not listed in the record of chaplains, a digital version of which can be viewed at

He is listed on the war memorial at Headingley College, which may be seen here.