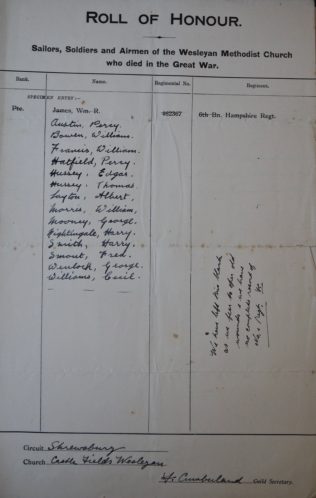 The commemoration of the war dead at Castle Fields seems complex. This list of fourteen men was compiled in 1928. A marble tablet had been erected in 1919, listing ten men. Two years later in 1921 a mahogany board was dedicated listing fourteen casualties and fifty men who came back. To add mystery to the story, one of men listed on the tablet does not appear nine years later on this list. This complexity may lie behind the statement the Guild Secretary chose to make.

“We have left this [the regimental column] blank as we fear to open old wounds & we have no complete record of No. & Regt.”

The fourteen men were:

Hatfield, the two Hussey, Mooney and Smith are missing from the 1919 tablet, but William J. Barker is named on the tablet, but not here.

This illustrates the uncertainty as to who should be listed on memorials. Decisions had to be made as to what level of involvement with a community was required.

The marble tablet was restored in 2014 and can be seen here http://www.warmemorials.org/search-grants/?gID=1099  It is described at

The mahogany board is described in two ways