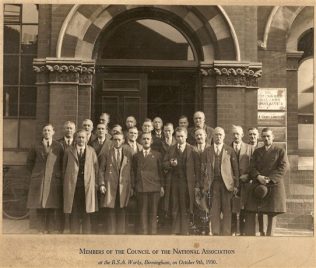 zoom
H.S.Bodey is 4th from the right holding the suitcase
click to enlarge 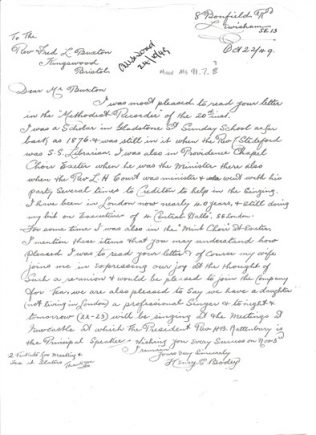 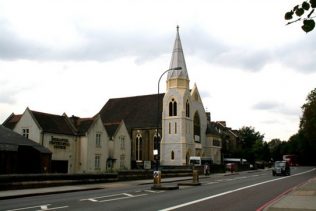 Henry was born in Bristol in 1870 and married Ellen Amelia Jelf in 1897 in Barton Regis and in 1901 is shown as living at 6 Camden Road, Bridgewater with family friends and her parents.

Ellen, was the daughter of Moses Jelf who between 1851 – 1901 progressed through trades as a Waterman, Labourer, Wheelwright, Ironmonger & Smith, Bright-Smith until in the 1901 Census, he is registered as a Cycle Agent. It therefore seems very likely that Moses and his sons Amos and Fred played no small part in H. S. Bodey’s change of career path from Cabinet Maker to Cycle Manufacturer / Agent. Ellen died on 12 August 1901. There does not appear to have been any children of the marriage.

Henry then married Ann Robinson in 1908 in Bath.

He owned three bicycle shops in the Borough of Lewisham and lived from c1936 – November c1940 at 17 Albion Road, SE13 and from c1949 – c1951 at 8 Bonfield Road, SE13. He attended the Methodist Conference of 1936 as a Lay Member of The London Mission and Extension Committee. This was a very large committee appointed by the Conference and would have produced a fairly substantial report for Conference. He would have been involved with the London SE Missions – the main ones being at Bermondsey, Lewisham and Peckham. He also attended the Methodist Conference of 1950 still on the same Committee, but his name does not appear after that. He died in Croydon in 1951.

His only daughter Annie Grace born in 1911 was a member of the Royal College of Music and a Choral Singer performing throughout England and abroad. Her career seems to have started about 1929 and ended about 1965. She died in 1998.