You are here: HomenextPeoplenextFamily HistorynextThe Payne and Watson families from Rutland

The Payne and Watson families from Rutland 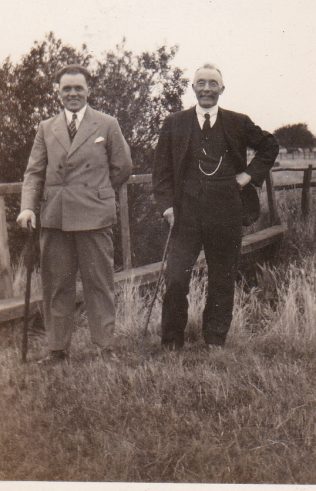 John Payne was a railwayman for 47 years, mostly at Nottingham. In addition to Methodist connections, he was secretary of the Railway Mission.

John was born on 28th February 1865 at Beaumont Chase, near Uppingham, to James and Martha Payne. He left school at the age of 10 and started off helping his father who was a shepherd. He remembered being up at 5am and working until 10pm during the harvest. When he was 19, John went to work for the Midland Railway at Nottingham, starting as a carriage cleaner and eventually becoming a parcel van driver. In 1890 he married Rebecca Grace Watson from Ashwell in Rutland, the daughter of an agricultural labourer.

They eventually retired back to Ashwell and were interviewed by the local paper on the occasion of their Golden Wedding. Their recipe for a long and happy married life was to “work hard and keep sober habits”.

Rebecca sang in the choir at the parish church, but was a member of Ashwell Methodist Church when they moved back after 49 years living at Tealby Terrace in Nottingham.

John was a teacher at the Railway Mission Sunday School in Nottingham and received a diploma from the National Sunday School Union after 25 years’ service. He was also superintendent there for a number of years. He played a prominent part in the acquisition of new premises for mission work.

Rebecca Watson had a brother called Frederick William Watson, a coal agent, who married Annie Jones in 1894. Frederick lived in Ashwell all his life and was a regular Chapel goer. He enjoyed nothing better than a hearty sing and was photographed looking through the Methodist Hymn Book by the local paper on the occasion of his 89th birthday. He died in 1965 aged, 95. He and Annie had a daughter, also Annie, who married Rev Henry T Rack in 1929. Henry sadly died in 1940 and Annie lived in Ashwell next door to her Uncle and Aunt Payne for many years. Annie lived to be 104 and was the mother of Rev Henry D Rack, an eminent Methodist scholar.

John and Rebecca Payne had two sons, John in 1892 and Frederick William in 1899. Frederick worked for over 50 years for the railway. He was Sunday School Treasurer at Batford Methodist Church, Harpenden and during the war helped to run a canteen at the Church to support soldiers at the nearby POW camp. He was married to Beatrice Bassett in 1933 and they had a son, Norman, who continued the family’s long connection with the Methodist Church. When Norman married Valerie Brill in 1958 the headline in the local paper was ‘Sunday School Teachers wed’.

Norman and Valerie lived for 5 years in Norwich where they were very involved in organising the East Anglia District Methodist Youth Festival in the 1960s. Back in Harpenden, the family interest in mission led to two visits to Mission Aviation Fellowship pilots and families in Australia and Papua New Guinea.They participated in youth rallies at the MAYC London Weekends and hosted youngsters from other parts of the country. Norman also served for many years as Treasurer for the Circuit Fund for World Mission.