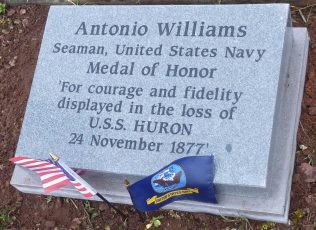 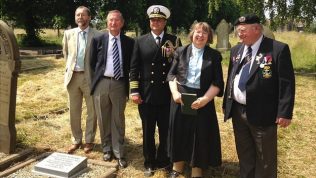 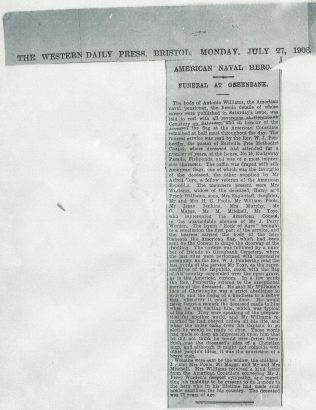 Born in Malta c1825, Antonia Williams went to sea at the age of 15 serving on whalers and merchant ships before joining the U.S. Navy in 1865. On 23rd November 1877 he was aboard the U.S.S. Huron sailing from Hampton Roads, in south eastern Virginia, down the east coast, heading towards Cuba when it ran aground off Nags Head, North Carolina, in heavy weather.

For his courage in rescuing at least 4 men, despite having back injuries which put him in hospital for three months, Antonio was awarded the U.S. Medal of Honor (he is the oldest recipient). He went on to serve with the US Navy until 1891 when he was discharged.

Antonio and his wife Maria, together with their three children, returned to Maria’s home town of Bristol where they attended Eastville Free Methodist Chapel.

Antonio died in July 1908 and was buried in Greenbank Cemetery with full military honours, with the American flag draped over his coffin. The funeral service was read by the Rev. W. J. Penberthy of Eastville Free Methodist Chapel.

In 2013, while researching war graves in Greenbank Cemetery, local historian Steve Lovell came across the overgrown grave of Antonio Williams which showed no recognition of his bravery. Shocked at this Steve took it upon himself to clean up and rededicate the grave.

On Monday 23rd June 2014 a short service of rededication was led by the Rev. Angie Hoare of Eastville Park Methodist Church. The new headstone was unveiled by Captain David Stracener, the U.S. Naval attaché in London and Tony Walworth from the Royal Naval Association sounded the Bosuns Call.