by the Dean of Westminster 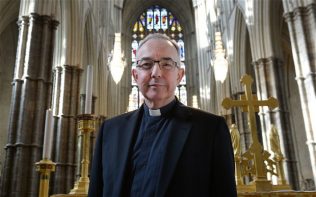 I was baptised on Easter Day 1949 in William Street Methodist Church in Woolwich, the church where my parents, Robert and Margaret Hall, had been married in 1946, and which my mother’s family had attended for two generations. My older sister was baptised there too, but my younger brothers, twins, were baptised in 1951, in Eltham Parish Church. My mother was confirmed in Southwark Cathedral in 1953. When my parents had moved to Eltham six months after their marriage, they had agreed to attend the parish church and that is where my sister and brothers and I were all brought up as Anglicans.

My maternal grandparents were both of Methodist families. My great-grandfather Henry Wright was a lay preacher at William Street and built and managed large numbers of houses in Woolwich and Plumstead. My great-grandmother on the Walker side of the family was latterly much involved, my great-grandfather having been in the army, with the Soldiers’ Home in Woolwich, where there was a Walker room.

One of my great uncles, Frederick Charles Wright born in 1861, was a Methodist minister, whose last posting was I believe in Stamford. I have his communion cup. Further back, on his mother’s side, were other Methodist ministers. The family name was Rowe. I am not clear whether George Hambly Rowe and John Ranshall Rowe were both ministers, but we still have in the family miniatures of them.

My maternal grandfather Caleb Leslie Walker was a member of the Methodist Board for Forces Chaplains and my aunt, Florence Annie Walker, worked for many years at Methodist Central Hall as secretary to the Board’s Secretary. She edited a magazine for the Methodist forces chaplains called Over to You, for which I wrote an article in 1968 about my gap year experiences in Nairobi. She and my grandparents lived in Blackheath and, after William Street closed, attended Sunfields Methodist Church. My grandmother Katie Louise Walker and my aunt each spent their last years in Bognor Regis, living near my parents in their retirement in Chichester. We always called my aunty Flo, but I learnt not long ago from a former colleague of hers at Central Hall that there she was known as Fluff!