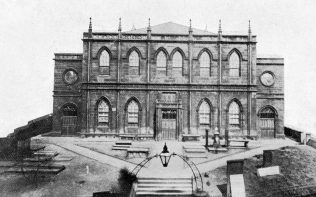 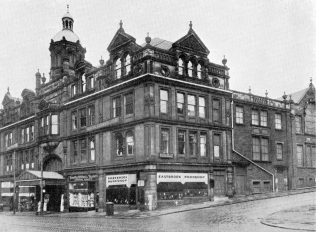 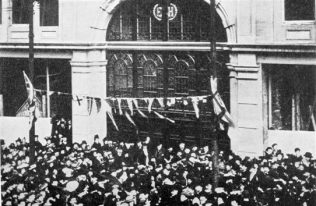 Eastbrook Hall was built in 1904 on the site of the old Chapel which had been built in 1825.

The Opening Services of the Eastbrook Hall took place from March 21st 1904 until April 10th 1904. On Monday March 21st the Opening Day, Mrs W. Oddy (of Birkenshaw) opened the Hall at 11.30 am. This was followed by a Service in which the Revs. Silvester Whitehead (President-Elect) and G. Stringer Rowe took part; and the Rev J.G. Greenhough, M.A. (ex-president of the National Free Church Council) preached the first Sermon, from the text ‘By their fruits ye shall know them’.

In the afternoon at 3.30 the Dedicatory Meeting was presided over by the President of the Conference and addressed by the President-Elect, The Revs. H.J.Pope, D.D. and S.F. Collier, and Mr T,S. Simpson, M.A. of Leeds.

Mr. Wm. Middlebrow (of Morley) presided over the Evening Public Meeting, when the speakers were the President and the Revs. J.G. Greenhough, S.F. Collier and H.M. Nield.

The following Saturday, The Eastbrook Prize Choir gave a grand Inaugural Concert in aid of the Organ Fund.

On Sunday March 27th The Services in the Hall were conducted by the Revs. W.T. Davidson, D.D. (exPresident) and Samuel Chadwick. On Good Friday April 1st at the afternoon Love-Feast and evening Rally the speakers were the Revs. Charles H. Kelly and H.M. Nield.

Limelight Lectures followed: on Easter Sunday by Coun. H. Hibbert, F.R.G.S. who spoke on Treeland; whilst on Easter Monday Mr Nield delivered on entitled ‘A Trip to Niagara Falls and Back’.