You are here: HomenextChapelsnextYorkshirenextMethodism in Greetland, near Halifax

Methodism in Greetland, near Halifax 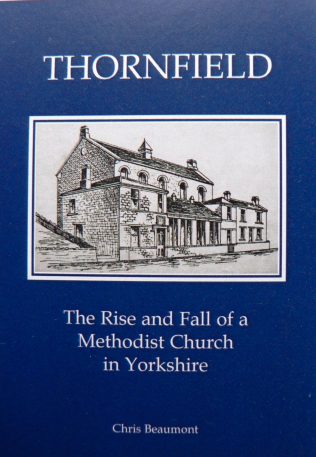 Greetland is a village located on a hillside overlooking the Black Brook, a tributary of the River Calder. The first church was built in 1778 and it was visited, on three occasions, by John Wesley. In the 19th century the population of Greetland increased to accommodate workers in the rapidly expanding textile industry.  The Wesleyan church was joined in the village by Lindwell Primitive Methodist Society which was formed in 1821. The Primitives initially met in domestic premises before moving to their newly built chapel in 1837.

In 1853, Greetland witnessed a mass open-air meeting of Wesleyan Reformers who proceeded to establish a third Methodist church in the village within a stone’s throw of the Wesleyan church. The new church had various names over the years including the United Methodist Free Church, Greetland, before settling on Thornfield Methodist Church, following the union in 1932.

The three societies coexisted with their differing traditions and village families with religious aspirations were fairly rigidly divided (in a mostly friendly way), each staunchly supporting their favoured branch of the Methodist family or alternatively attending St Thomas Church of England, built in 1860.

Following World War Two a general decline in church-going was experienced and there were serious problems with dry rot at both Thornfield and Greetland Wesley churches. In 1968 these two churches amalgamated to become simply Greetland Methodist Church. After demolition of the original buildings, a multipurpose, pre-fabricated structure appeared on the Wesley site. The Lindwell Methodists continued separately until 2013 when they too amalgamated, a process involving the replacement of the pre-fabricated buiding by a splendid new building on the same plot of ground and the acquisition of a brand new name – Cross Hills Methodist Church, Greetland.

Historical accounts of the Greetland Wesley and Lindwell churches have been written previously, but a new book is now available describing the history of the Thornfield church. The author inherited a collection of old documents which were used to piece together the story which is illustrated by many photographs. The book also includes a series of personal reminiscences from the 1950s and 60s.

The money raised from the sale of the book (£11.55 including P&P) will be donated to Cross Hills Methodist Church. Copies may be obtained by contacting chris.beaumont7@btinternet.com