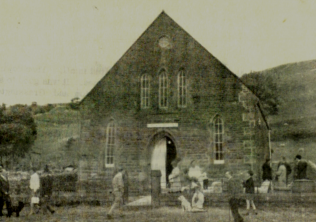 The Rev. David Copestake went, in 1965, with the Eastbrook Scout Troop to a scout camp near Grassington, when it would seem that a great time was had by all.  They had been on the river Wharfe, they had been in the river and they had been thrown in, minister and all.  David Copestake had taken a full part in the camp and seen how good it had been for the youngsters.  This must have been in the back of his mind for during the summer period of 1966, he took some inner city lads camping in Wharfedale.  David had another great time watching these lads enjoy themselves so much, they had seen a sheep, a cow, a green field, the river and all manner of things.  There was one thing that upset David on their return, he took one little boy, who was very excited and wanted to tell mum all that he had seen, home only to find that there was nobody in the house save his younger brother who was in bed in the otherwise empty house.  I cannot remember if he had to wait for the bingo or the pub to close before mun was to return!

David felt that the Mission should be more involved in this way with these youngsters,  and so he went back up Wharfedale on a number of occasions trying to find some sort of building that could be used for housing youngsters on holiday rather than always camping in the rain!  He spoke to farmers and others looking for a disused barn or some other building that could be used.  In the end he came back to the Mission with promise that Eastbrook could have the use of the Coniston Chapel.  The Chapel was part of the Grassington Circuit,  it had only two members left and both had ceased to meet.

So Eastbrook could have the use of the Chapel rent-free provided that some of the Eastbrook preachers were to help in the Grassington Circuit.  It was also a condition that in converting the Chapel into a hostel that half the worship area of the building should be retained for worship, and that when the buliding was in use over a weekend that a service of worship should take place at which anyone was to be made welcome.

The conversion was done by members of the Eastbrook youth groups, including Meth Soc. and Eastbrook members who were tradesmen. Eastbrook members gave the money from sponsored walks etc., and supplied the food when young people were taken there.

The Conistone Chapel & Hostel was opened on July 8th 1967, by the Rev. Frank Thwelis, the lessons were read by Sister Jean Stephenson, and Miss Betty Riley.

More than twenty young people stayed overnight and the next morning Sister Jean led a joyful service of thanksgiving in the Chapel.

The sad thing is that if you go the West Yorkshire Methodist Church website, none of this is mentioned, rather it seems that the Chapel came up for sale in 1980, and it all started from there. I challenged the last chairman of the district about this and was told that this is how you re-write history, how very sad.