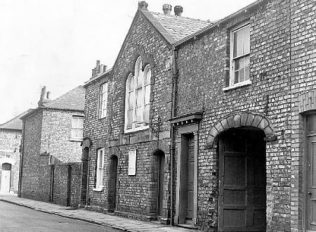 James Street closed around 1973. Before then when I was a child up to when I was married in 1969 there was at most 25 regular congregation on a good evening but sometimes in Winter we had fewer than a dozen. When it was particularly cold we sat round a coal fire and the preacher of the day sat with us, otherwise there was a small mezzanine with pulpit and an organ. There was an upper gallery but this was never used in my days there. A young student came to play, otherwise the chapel care taker played an ancient piano but she was not very skilled at playing hymn tunes but our singing covered a lot of the missed notes. We were only a tiny congregation but had some wonderful times meeting together each Sunday and on other occasions too. I remember it had closed by the time my mum died so we had her funeral in yet another York Methodist Church in January 1974.

We were a very small congregation and were attached to the larger Monkgate Circuit York which is where I was actually married in 1969.