You are here: HomenextTopicsnextMAYC and other Youth GroupsnextSquash at Bromley 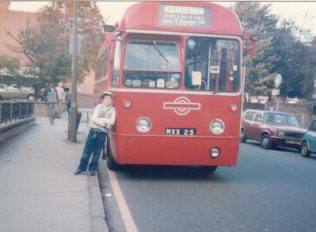 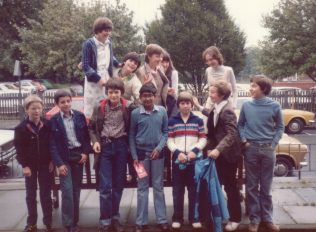 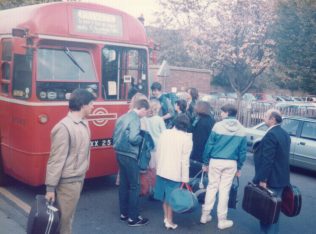 zoom
Trip to the Adelphi, Circa 1985?
Andrew Willock (click to enlarge) 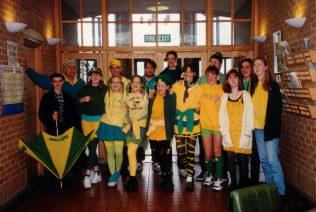 Bromley Methodist Church had a problem

The open youth club which was sponsored by Bromley Borough Council had suddenly gone out of fashion with the local kids, and closed. As the church had no youth club of its own, it needed to find someone to run a group for church family youngsters. The Church had two ministers at the time, and as Len Barnett was asking Nick Holt to run it, John Hudson was asking me. We both agreed to lead the new group, however after a short period while we allowed the ministers to worry about which of us could be stood down, we agreed between ourselves that Nick should be the leader, and I would assist. Nick Holt and his wife Linda were a young couple from the evangelical wing of the church and they lived only about 100 yards from us on the corner of Westmoreland Road. So began for me a new involvement with youth work, and through it my eventual leadership of the renamed ‘Squash’ youth group.

Nick’s and my first attempt at youth work ended in failure. The club met on Sunday evenings at 8.00pm. The Church kids came at first, then others started to join, and the church kids stopped coming. We were left with a group of young people with no commitment to anything who liked the idea of a pop-in youth club whenever they felt like it. When warmer weather arrived, the kids stopped coming altogether so Nick and I agreed to call it a day, and to try and re-form the group in September, but this time on our terms.

Our new group was to be open only to young people who were either a part of our church, or who were prepared to get involved with our church. We also decided that it should be a club for the fourteen plus age group. Surprisingly despite these conditions the club started and grew like topsy. We had a programme of activities for each meeting and the young people provided their own music.

Through this youth group, which we initially called ‘The Squash’ because at the end of the evening they had squashed into our cars to go home, I was introduced to the truly wonderful Methodist Association of Youth Clubs (MAYC) London Weekend. Some fourteen thousand young people and leaders gathered in London in May, wearing the bright yellow and green colours of MAYC, and took over both Central Hall, Westminster, and the Royal Albert Hall, for a mixture of entertainment and worship, and finishing with a march and rally in Trafalgar Square.

Accommodation was found in church halls all over London. Our group became regular attendees of the event Groups from far afield would stay at our church in Bromley, and our youngsters often stayed at the church as well. We also found a benevolent classic bus owner, Fred Chapman, to transport us about. Fred owned a 40 year old former London Transport coach, in its original livery, and this had the advantage of being able to park anywhere in London as it was thought to be still in service. In later years, the Brixton academy was also added to the list of venues as the popularity of the Weekend grew. Its demise came at the hands of the miner’s strike, and general recession, which meant that northern groups couldn’t afford to pay the spiralling costs of hiring the Royal Albert Hall. So slowly via a pathway of a series of lesser venues, the MAYC London Weekend faded away. I am left with the memory of a comment by one youngster after going to the Brixton Academy who told me “it had been the best day of her life”.

Among other highlights were the Adephi weekends that took place on one of the half-term weekends in October. The Adelphi Hotel at St Leonard’s-on-Sea was one of the Methodist Hotel chain. When we first tried to book the hotel we were told that it had already been booked by a youth club from Tonbridge, however when I spoke to them it was clear that they would only take a handful of youngsters and in previous years this had proved to be a somewhat sombre affair. The Tonbridge group were quite pleased to have us share the weekend with them, and as luck would have it there had been a ministerial change at Tonbridge and the new man was Rev Tony Cox who had previously been a full-time youth worker. Apart from being a bit disorganised, Tony was great, so I did all of the paperwork, and he planned the religious content in a youth-friendly manner.

There were some very talented lads in the Squash who had formed themselves into a band, with all of the electric paraphernalia of the day, so we set off on the Friday evening for the Adelphi. Every member of the Squash came and the new hyped-up format was a great success with the Tonbridge kids. With a Disco on Friday night, a highly successful ‘home grown’ entertainment on Saturday followed by a late night walk and then evening film, the weekend was action packed from start to finish. I am reminded that one item in the entertainment was Nick Holt, and Tony Cox, and myself, dressed in aluminium foil singing as The Three Degrees. Tony also performed a jive routine with Margaret Smith, claiming that they were previously the 1951 Jive Champions of Butlins, and then danced again, this time with me dressed in a tutu with large boots, dancing to music from Swan Lake.

Fred’s bus, which by now we regarded as our own, was again pressed into service as our transport. Best of all we had negotiated a generous deal with the Hotel Manager which meant we only paid the under 16 rate of £15 for the whole full board weekend. Part of the fun and games was that, despite our best efforts, the youngsters who were too excited to sleep wandered around the Hotel half the night until they were finally exhausted.

The first and subsequent weekends were extremely popular with the young people but eventually it became a victim of its own success, with more wanting to go than we could cope with, and we called a halt to it.

The club also put on entertainments and I found myself writing some of the scripts. One which we repeated frequently was stolen from a ‘Hancock’s Half Hour’ programme and featured a play called ‘Jack’s return Home’. As a now successful club within MAYC, our youngsters took part in London Weekend performances at both Westminster Central Hall and the Royal Albert Hall.

Another highlight was when the young folk took part as the dancer’s and chorus in a semi-professional production of a musical, written by Paul Field, called ‘Daybreak’. Paul had worked with a young Methodist Minister, Rob Frost, and between them they led a group of evangelistic ministers and lay people who inspired the whole of Methodism. The ‘Easter People’ events sprang from this group.

It was after the first of the Adephi Weekends that Nick told me of his decision to candidate for the Methodist ministry which meant his moving to Bristol for the necessary training. So I became the youth leader, and I continued to be so until my son Douglas reached his teenage years when I thought that it might be better if the club was led by someone else.