You are here: HomenextTopicsnextMAYC and other Youth GroupsnextMethodist Association of Youth Clubs 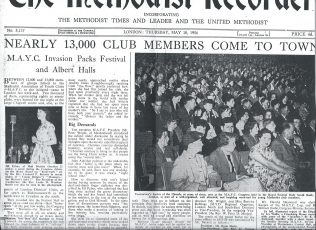 I recognise that the 70s and 80s are considered to be the heyday of MAYC, but for my generation it was the 50s with the Rev Len Barnett.

London Weekend was the highlight of the year. Our club, being near to London, in St Albans, several times entertained guest clubs from more distant parts of the country camping overnight at the church or in our homes.

We took part in the action at the Royal Albert Hall over several years either in the arena or in the choir conducted by Steve Race.  I still have some of the music we sang.  One year the opening theme involved hundreds if not thousands of spring flowers, daffodils and tulips, which we participants were required to make out of crepe paper. That kept us busy for many weeks!

The Saturday morning Congress was held in Westminster Central Hall and later in the Royal Festival Hall.  In 1956 the Methodist Recorder printed the account of the weekend with a photograph of the members of the Congress. The caption (prophetically!) read:

“Tomorrow’s leaders of the Church, or some of them, seen at the MAYC Congress held in the Royal Festival Hall, South Bank, London, as part of a well-organised, well attended, and inspiring week-end for young Methodist guild members.”

Two of our members could clearly be seen (4th row, extreme left).  They are now both supernumary ministers: the Rev. Roger Lee, and the Rev. Dr Albert Jewell whom I married several years later.  We celebrated our Golden Wedding in 2012!