You are here: HomenextTopicsnextMAYC and other Youth GroupsnextLondon to Salisbury 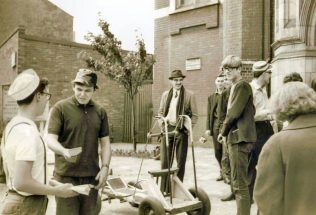 Just imagine doing it now!
But it was the 60s and this was our second sponsored effort to raise money for the Methodist Ivory Coast Hospital appeal. Two ‘soap boxes’ were constructed, and members from the Circuit left Wesley Hall, Sydenham, London, to push one of the youth club girls steering these contraptions over 100 miles from London to Salisbury. Two boys per trolley took turns of, as far as I can remember, a couple of miles each when a van would drop off the next pair and so on. We even had replacement girls when they got sore and tired! One trolley did have a crash en route but nothing too serious. We achieved our objective but on the suggestion from the police stopped short of the city centre because it was a bit busy.
Now I’m living in Somerton Somerset and decades later we had a visit at Somerton Methodist Church from Claudette, a lovely lady, from what was the Ivory Coast, surprise surprise, she was one of the first babies to have been born in the Methodist Ivory Coast Hospital.