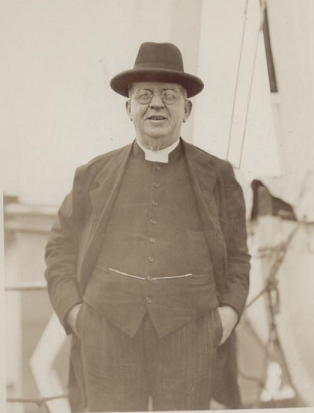 Work and the Ministry

NBC Radio Minister 1923-1936: Cadman was a pioneer radio evangelist broadcasting his Sunday Sermons over the NBC network to reportedly millions of listeners across America

Samuel Parkes Cadman was born in Ketley, near Wellington Shropshire, where he worked in the family coal mines from the age of 11.

Cadman’s father Samuel and Grandfather Robert were both miners and lay-preachers and as a boy Sam jnr developed a voracious appetite for reading the bible. Every Sunday, both father and grandfather rising at dawn, would dress in their best black clothing then set off to preach in the pulpits around the Prees circuit. Joining his forebears, young Sam cultivated his pulpit style set by their examples and was known to ‘practise’ his sermons on his workmates at the mines.

Young Sam Cadman was for a short time a student under the watchful eye and direction of Sir John Bayley, founder of the Wrekin College, Wellington. As he grew in confidence, he imagined he would go to London and study at the Richmond Wesleyan College, (part of the London University 1903). After passing the entrance examination with the Birmingham Synod, Cadman journeyed to London to take his place at Richmond. He passed the entrance exam with ‘flying colours’ and was a student at the college between 1886 and 1889.

b. 18th December 1874 in Harpenden, Hertfordshire (d.31 August 1962) was an English portrait painter and artist and long-time friend of SPC. They met when Cadman was a probationer at Richmond College and as was required of the young seminarians, he was dispatched to Harpenden Methodist church to perfect the art of pulpit oratory. The Salisbury family were lifelong Methodists and Cadman stayed at their home on numerous occasions whilst preaching at the local church. Many years later, around 1914, Salisbury was in New York on business and he happened to read Cadman’s daily column in the New York Tribune. He wondered if this was the same Cadman who had stayed at their family home in Harpenden some twenty years ago. Salisbury took himself off to Cadman’s Sunday service at the Bedford YMCA, Brooklyn and waited to meet with the famous preacher at the end of the service. When it came to his turn to shake the preachers hand Salisbury reminded Cadman of the days back in Harpenden. At that point a ‘sudden flush of happy memories’ flooded over the reverend and at that very moment a friendship ‘so deep and true was forged…that nothing could ever break it’ (‘Sarum Chase’ An autobiography; Salisbury, Frank. Owen p.94).

On Wednesday the 17th of September 1930 at 3p.m, Cadman was invited to preach at the grand opening of the new church on Harpenden High Street. The occasion marked the end of a week of 7 events. This lavish ceremony was attended by more than 500 people consisting of Ministers, Church Officers, the Choir, members of the Urban District Council and representatives from all churches who marched together in procession from the old church to the new led by the Rev. Leslie Keeble. According to the Order of Service, the opening address was read by Mrs H. Humphrey, followed by Alan Brace the architect of the new church and SPC (of New York) led the prayers and hymns. Salisbury had been commissioned to create a stained glass window for the new church and it’s design was dedicated to his parents Henry & Susan Salisbury (HS b.1838-d.1923 & SS b.1838 – d.1927 ) ‘who were for 60 years members of this church’(The Methodist Times 1930). The window was manufactured by ‘Hawes and Harris’ of Leyton Road, Harpenden; this outstanding stained glass window represented the ideals of Salisbury’s parents:

Love of God, Love of Country & Love of Work

The friendship between Cadman and Salisbury blossomed over the years and they collaborated on a book together, ‘The Prophets of Israel’ (Macmillan) in 1933 a beautiful example of the Old Testament gospels. Salisbury illustrated the book while Cadman wrote the text.

On July 5th 1936, while preaching at an interfaith service in Westport, New York, Cadman collapsed with acute appendicitis. He was rushed to the Champlain Valley hospital but despite doctor’s orders to remain in bed Cadman discharged himself. Later that day in Plattsburg he preached to an ecumenical congregation of Protestants, Jews and Catholics his famous sermon – ‘The World at a Crossroads’. Aware his demise was imminent Cadman returned to the hospital and underwent surgery. His daughter Marie Isobel donated blood to her father and his son Frederick stayed with him throughout his ordeal. Throughout that week he slipped in and out of consciousness and on July the 12th just after 1pm he turned to his son Frederick saying ‘there are 10 good years in me yet’(Milwaukee Journal). Sadly, he slipped into a coma and at 1.22pm the greatest pulpit orator ever known was dead, he was just 71 years old. Cadman’s coffin was taken by train to Brooklyn and a service arranged at his church, thousands attended the ceremony; even more thronged the streets outside. His body was interred in the family plot at Kensico Cemetery, Valhalla.

In Salisbury’s eulogy he lamented the loss of his dear friend, “With the passing of Dr S. Parkes Cadman, the world has lost one of its greatest forces for Peace, Brotherhood and Unity.” (GB 135 FOS/Box 3:The Frank Owen Salisbury Papers: John Rylands University: Frank Owen Salisbury, Artist and Methodist layman c.1905-1962)

Cadman Plaza Park, New York, USA was named in honour of Samuel Parkes Cadman who lived and worked in the city for 46 years.

A biography about the Life & Times of Samuel Parkes Cadman is scheduled for release sometime during 2014 to mark the 150th anniversary of his birth. If you would like to contribute to this book in any way, anecdotes, memoirs or photos, please contact the author: vivhulme@yahoo.co.uk

A special thanks to Shirley Bruneau for all her support and research contributions.