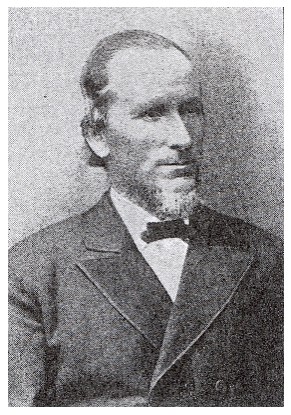 The Rev. John Bee Wright served the church for half a century, both in England and in the US, his adopted country. He was perhaps a somewhat controversial figure in Victorian London which as the stories go led to his fleeing for his life to New York State …

John Bee Wright (JBW) was born on 10 April 1828 at Aldeby a small village south of Norwich near the border of Norfolk and Suffolk counties. At the time, Norwich was a centre of shoemaking in England and in his early life he adopted this profession, at one time employing 15 men. However it seems that he was called to God very early on and preached from an early age.

In the UK census of 1861, JBW is listed as living in Navenby in Lincolnshire as a Wesleyan Reform Minister. In the 1871 census he was listed as an Independent Minister of the Iron Chapel on Kensal Road near Paddington. This suburb of London – north of Notting Hill built up in a pocket near the railway was not a fashionable or salubrious address at the time.

Rev. John Bee Wright was born Alderby, Norfolk, England April 10, 1828 and entered eternal rest from Hamburgh New York on June 16, 1894. In early life, he was left without parental guidance. His earliest friend was a Miss Becket who took him two miles to Sunday School with dinner in her basket for both. She knew not that by the humble act she was giving the first propulsion toward a life of successful ministerial work. Under her influence he very early gave his heart to God. At 10 years of age, he began to speak and pray in public, and at 17 to call sinners to repentance.

Henceforth soul-saving became his ruling passion.  Few were the facilities for his intellectual culture, and he spent but 5 months in school. Yet he possessed a keen hunger for knowledge. Being appointed school librarian he seemed to devour every book he handled. In later years he visited the book stalls of London gathering a rare collection of books, many of which he gave to the Syracuse University.

After travelling the Alford circuit for several years, he was invited to London and became Secretary of the Lord’s Day Observance Association. Into this dangerous work he threw all his energies. His duties required him to be conspicuous in the prosecution of whiskey sellers and other Sabbath-breakers. A conclave of these men swore never to rest until he should be forever silenced. Day and night they tracked him, and after barely escaping their vengeance he fled to America in July 1871, his family soon following.

He was received into the Genesee Conference on his credentials and appointed to Clarence. Soon after the parsonage took fire and with the church was reduced to ashes, little being saved except his books. At once he set about the work of rebuilding, lecturing and soliciting funds amid great deprivations. The present beautiful Clarence church stands a monument to his prayerful and persistent toil.

His appointments were – 1871 Clarence; 1873 Williamsville; 1875 Hamburgh; 1878 Elma; 1880 Yorkshire; 1882 Port Allegany; 1885 Woodside, Buffalo; 1887 to ’92 Pekin. Near the close of his fifth year at Pekin, he was smitten with paralysis and removed to his home in Hamburgh, where after lingering in helplessness, but with marvellous patience for several months, he passed away in great peace.

He was an industrious worker. His few vacations taken at Silver Lake, were filled with study and work. His sermons preached at camp meetings and other places were replete with original thought, presented in that unique and quaint dress in which he clothed his discourses. They will long be remembered by thousands who listened to them. Bible study and Methodist theology were his favourite exercise. The poor loved him, for he was their friend. His benevolence was systematic and uniform, a tenth being the minimum of his giving.

His humility was such that the lowest place was never too mean if only he might serve his Lord and his loved church therein. His faith was beautiful in its simplicity. When asked in reference to certain painful experiences what he would do, he quietly replied “I have taken it to the Lord.” Because of this childlike trust he was always self-possessed and unruffled in mind and spirit. “He being dead yet speaketh” and his memory is embalmed in the hearts of his bereaved wife and children who walk in communion with the church he loved so well.

As can be seen JBW’s zest for preserving the Sabbath was not viewed well by all. The scathing newspaper articles of the time did not spare him mockery. Here is just a sample: