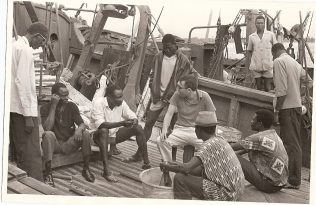 When I arrived in Bristol as an 18 year old undergraduate in 1959 I joined the Methodist Society and was assigned to David Phiri’s MethSoc group.  David was captain of the Golf Club and later got an Oxford golf blue; later still he became big in Zambian Consolidated Dopper Mines, Chairman of the Zambian Football Association and enjoyed the occasional round of golf with President Kenneth Kaunda.  Yet he had never played golf before arriving in Bristol.  In those pre-independence days he had earned pocket money by caddying, but only white Rhodesians could play.  David, who died in 2012, was the first African I got to know – as far as I recall he was the first black person I had ever met – and what became a love affair with Africa started with him.

Zambia was not yet independent but the decolonization of Africa was well under way.  It was the UN Decade of Development which we all believed was going to do for the less developed world what the Marshall Plan did for post-war Europe.  There was a scheme whereby some people did their post-graduate education year at Makerere in Uganda coupled with a two-year teaching appointment in East Africa.  Some of my friends did it and I had the same idea.

But my plans changed; I suppose I should say, God had other plans.  I went on to Wesley House in Cambridge and read theology, and was then appointed to work with the Methodist Church in Côte d’Ivoire.  In due course I was ordained and we stayed for nine years, until the children’s educational needs brought us back to Britain.  After an initial spell up-country, caring for over sixty village congregations in the rain-forest (long since transformed, alas, by deforestation), I had the post of port and industrial chaplain in the capital, Abidjan.  Partly because of the responsibilities of that job and partly because I was bilingual – no firm grasp of any African language, but you can get a long way in Africa on English and French! – I travelled to several other countries for meetings over the years.

It has been my privilege to exercise a pastoral ministry on four continents: in Africa, back in England, for six weeks in Missouri on a ministerial exchange and for three months as a locum tenens at the English-speaking Methodist Church in Hong Kong.  But from 1986 to 1996 I was on the staff of the Methodist Church Overseas Division.  I became its Africa Secretary just as it was celebrating two hundred years of official Methodist witness overseas.  (I emphasize ‘official’ because of course laypeople had been living and sharing their faith in many places long before any official appointments were made.)

The Overseas Division (MCOD) was the name by which the Methodist Missionary Society was better known from 1973 to 1996.  The name had changed, and so had the task.  I used to say that mission had become multi-cultural and omni-directional – mcod!  The Churches born of pioneer missionary activity had for the most part become autonomous, just as the nations had become independent. With their own indigenous leadership and ministry, their relationship to British Methodism had moved on (and I was able to help move all but one of the remaining Overseas Districts on before I moved on myself).

The Book of Revelation begins with letters to the seven Churches of Asia.  Much of the Africa Secretary’s work involved letters to, and from seventeen Churches in Africa.  I renewed my visits to the continent and can claim to have ‘been to’ 28 African countries.  ‘Been to’ of course has more than one definition.  I count only those where I have at least spent a night.  In most I have been to church.  The number where I’ve had diarrhoea – a definition that usually indicates a more intimate acquaintance with a place – is thankfully smaller!

I was entitled to a sabbatical and spent it in Hong Kong.  It was there (in fact within an hour of returning from our first visit to mainland China) that a phone call came to say the General Secretary had resigned.  I returned not to the Africa desk but to the hot seat of an organization in some disarray.  Thanks to some splendid colleagues and some faithful and long-suffering support staff, we got organized again.  From a financial position which had necessitated some painful cuts MCOD became, shortly before the Divisions were merged into a connexional team, one of Britain’s top fifty fund-raising charities.  I forget which paper published the league table; it was very gratifying, given that a body with the prefix ‘Methodist’ necessarily had limited appeal, and a fund-raising budget smaller than most of the leading charities.

But Methodists’ commitment to worldwide mission was sustained in the face of all the high-powered, glossily-packaged promotions that fell through their letter-boxes.  Enabling God’s people throughout the world to share more effectively in mission should be one of the commitments of every church member.

John Pritchard is convenor of the Methodist Missionary History Project