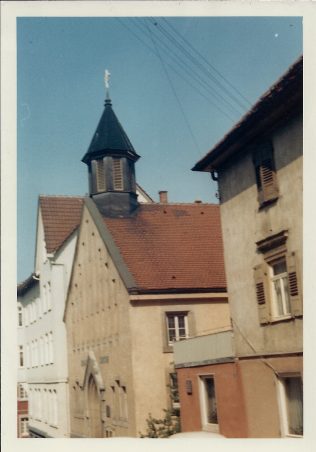 My last Sunday at South Ham Methodist Church, Basingstoke, was 21st February 1965, before I set off by train for Backnang, in southern Germany, to take up work as a postman. My mother stood on the platform crying as the train pulled out. Germany was beautiful on the night-time journey, with the snow and the old churches lit up by soft yellowish lights.

In my search for a church I went first to visit the Pentecostal pastor, but the only welcome I got was a woman, presumably his wife, leaning out of a far-up window in the flats asking me what I wanted, and not even inviting me in. I was a little put off also by the poster in the church window: Fastnacht – Greuel vor Gott [Carnival – abomination to God] . It may have been true, but it didn’t seem very welcoming or encouraging. So I went round the corner to Zion Methodist.

The Post Office had found a small room for me at the top of a tall building with no windows, only a snow-covered skylight. It was cramped and lonely, and I was glad when a family from Zion invited me to live with them, and I became their paying guest. They were the Preißler family who had fled from eastern Germany at the end of the War.

In the homes of other families linked with the church, I met elderly relatives who were allowed out on visits: being old, their possible escape was not considered important! From them, as well as from the Preißlers, I learned about life, persecution and suffering under Communist rule in the “Ostzone” – the Communist part of Germany.

I also attended an interdenominational youth meeting, and found a lively interest and concern for the plight of believers in eastern Germany, especially other young people. One evening we saw a film, Frage 7 , showing the difficulties of life for a gifted pastor’s son whose education was likely to come to an abrupt halt if he truthfully filled in the questionnaire asking, “What is your father’s occupation?” An especially poignant and powerful moment in the film was when a piece of paper was given to him bearing the verse Be thou faithful unto death, and I will give thee a crown of life. Those words have never lost their power to move me.

Back in England, I read more about Christians in eastern Europe. I began attending prayer meetings for persecuted believers there. By 1973 I felt God was calling me to focus my interest on Albania. In 1986 I became one of the founders of the Albanian Evangelical Mission, and retired as its director in 2011. It is a mission which works not only in Albania, but also in Kosova and the Republic of Macedonia.

Thus it was that Methodist hospitality played a very large part in introducing me to what later became my life’s work.