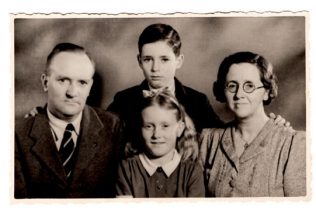 Francis Arthur James Utting was born on January 18th 1905 in Harlesden Middlesex at …
His parents were Florence Emma (Nee Gaze) and the Reverend Arthur William Utting.

As a scholarship boy he attended St Dunstan’s College in Catford, London and then as an exhibitioner went up to the University of Durham, Armstrong College. He read history and was an active member of international groups. Following his first degree in 1927 together with a first class Diploma in Theory and Practice of Teaching, Frank took a secondment to Fourah Bay College, Sierra Leone where he was Lecturer in Modern History and amongst other roles he was Normal Master for Sierra Leone joint government and missionary Teacher Training Schemes. There he assembled materials for the first History of Sierra Leone published after his return. (The Story of Sierra Leone, Longmans, London, 1931)

He returned to England and in August 30th 1930 he married his fiancée and fellow history graduate Hilda Batey in Newbiggin- by- the- sea Northumberland. Shortly afterwards, following interview with his new wife, he joined the Methodist Missionary Society and went to Ceylon, first as Vice Principal Wesley College Colombo. In 1934, he was seconded to research Methodist education in South Ceylon. His report covered 100 schools and was printed for Synod in December 1934. Later he completed his M.Ed. with the University of Durham. In 1937 he was appointed Principal of Kingswood College Kandy. During that time, he became fully qualified as a Local Preacher and also in the Sinhalese language. Both he and Hilda were prolific writers for the local press on matters such as music in worship, the impact of education on unemployment, the importance of co-education, Christian training for citizenship and many other topical and influential matters. Hilda was an influential musicologist and broadcaster and also engaged diverse groups of amateur singers and musicians in performances of oratorios and sacred music. By the end of his career in Ceylon Frank had served as President of the Kandy Teachers’ Association and Vice president of the All Ceylon Union of Teachers, as well as elected to the Committee of the Ceylon Headmasters Conference and member of the Governing Body for Ceylon Methodist Schools.

After the outbreak of world war and the threat to Ceylon ports notably Trincomalee, from the Japanese, he and the family, wife Hilda and children Stanley and Lorna, were posted in 1942 to Southern Rhodesia, now Zimbabwe, where he took up an appointment at Waddilove Training Institution, Marandellas involved with teacher and ministerial training.

During this difficult time, the family were able to be hosts for various colleagues and others caught up in the theatre of world war. The family were allowed to return to England in June1946 despite restrictions on travel at that time. In September of that year their daughter Joyce was born and in December he left the Methodist Missionary Society.

His post war work was eventually as head of history at Crewe Grammar School, lecturer for the WEA and occasional Methodist local preacher.

He was later remarried to Doreen Christie a widowed family friend.

He died in Wistaston, Crewe in 1989 at the age of 84, leaving son Stanley and daughter Joyce Chamberlain.