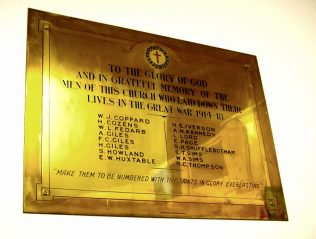 The World War 1 memorial in St Peter’s Church Canterbury reads: To the glory of God and in grateful memory of the men of this Church who laid down their lives in the Great War 1914-18:

“Make them to be numbered with thy saints in glory everlasting”.

The second man listed, HAROLD SOMERFORD COZENS (1893-1917), came from a family of leading Canterbury builders who played a major role in the life of the Wesleyan chapel over many generations . Lists of trustees between 1844 and the 1960s always included at least one Cozens. When Harold’s grandfather, Thomas Grant Cozens, died in 1906 the Methodist Recorder described him as ‘the beloved veteran of Canterbury Methodism’.  Harold, who was a Private in the Royal Army Medical Corps (number 88822), was killed at Salonika on 12 March 1917.