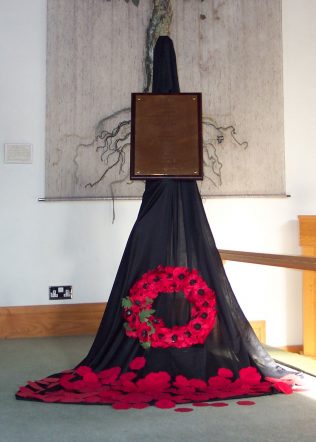 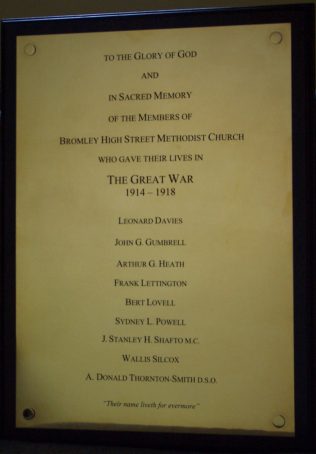 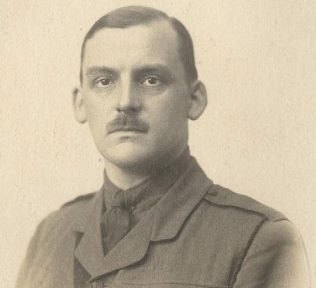 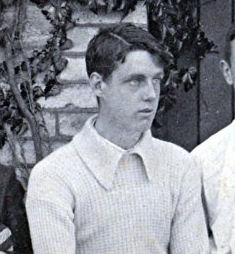 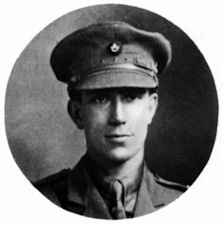 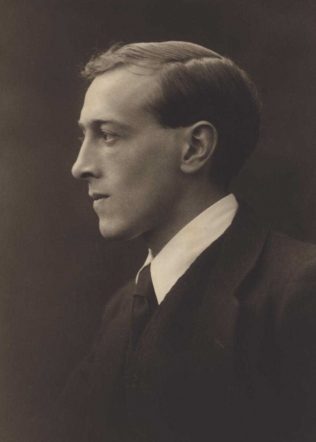 zoom
By permission of the Warden & Scholars of New College Oxford

Dedication of the new Memorial

On a bright sunny November morning the congregation of Bromley Methodist Church joined with the rest of the country, as we did every year, to pay tribute to the UK’s war dead. But Remembrance Sunday 2011 was more poignant than in previous years, for we were also honouring the memory of nine young men killed in action during World War I who were members of our church.

Their names had been inscribed on a stone war memorial unveiled in the Bromley High Street Methodist Church on 19 February 1922, which subsequently survived the move to a new Methodist church in 1965, but sadly was unable to be taken to our current place of worship in College Road in 1990, and was lost.

So on Sunday, 13th November 2011, we came together to pay tribute to these fallen men of the Great War 1914-1918 and to dedicate a new brass war memorial bearing their names. We were also joined by Lynne Wood, the great grand-daughter of one of them, John Gumbrell.

Led by our minister, the Reverend Karen George, the same words read in 1922 were used to dedicate the memorial, before Lynne Wood laid a wreath of poppies at the foot of the brass plaque, which was on a stand draped with black cloth at the front of the church. Prayers were then said dedicating the memorial to God, and remembering those whose lives were lost in world wars and conflicts past and present.

Following the two-minute silence and the Last Post, played by Fergus Macdonald on his trumpet, the hymn O God, Our Help in Ages Past was sung. Later in the service, we were invited to write our own prayers on poppies which we then laid at the foot of the memorial.

A fitting tribute to the memory of nine young men who bravely went off to war in the knowledge they were serving our country, but who never returned, and who we never knew.

We Will Remember Them.

LEONARD DAVIES was born on 7th July 1882 in Forest Hill, Kent to Reverend Owen Davies and Alice (nee Hollingdrake). Owen Davies was a Wesleyan minister from Newlyn in Cornwall. He had married Alice in 1878 following the death, in 1875, of his first wife Jane Amelia Seccombe.

Leonard attended Truro School from 1892 to1895, then Harrogate College. After leaving school he went on to gain a Masters degree at Oxford (Queens College), after taking a BA at London University.

Leaving Queens in 1911 he became a teacher at St. Edward’s School, Oxford until 1915 when he joined the Rifle Brigade.

Captain Leonard Davies, of the 5th/9th Battalion Rifle Brigade, was killed at Wancourt on 17th June 1917 aged 34 years. He is remembered with honour at the London Cemetery, Neuville-Vitasse.

John Jnr lived in Walthamstow with his wife Jane and their three children. Before joining the Bedford Regiment John worked for Micanite & Insulators Co Ltd and Great Eastern Railways.

Private John George Gumbrell, of the 1st Battalion Bedfordshire Regiment, was killed on 15th November 1914 aged 27 years. He is remembered with honour at the Ypres (Menin Gate) Memorial.

Arthur applied for a commission just three days after the declaration of war. Shortly after his battalion landed at Boulogne on 1st June 1915 Arthur was sick with blood poisoning and then in July he received a scalp wound from a shell splinter.

Lieutenant Arthur George Heath, of the 6th Battalion Queen’s Own (Royal West Kent Regiment), was killed on 8th October 1915, his 28th birthday. He is remembered with honour at the Loos Memorial.

HARRY FRANK LETTINGTON was born in Bromley, in 1898, the youngest of ten children, to William Lettington and Jane (nee Revell). In 1900 they had settled in Stanley Road, Bromley and the youngest children attended Raglan School.

All six brothers fought in the war only two returned. The four brothers died within three months of each other in early 1918.

Private Frank Lettington, of the 7th Battalion Queen’s Own (Royal West Kent Regiment), was killed on 28th March 1918, aged 19 years. He is remembered with honour at Pozieres Memorial.

Private Bert Lovell, of the 8th Battalion Queen’s Own (Royal West Kent Regiment), was killed on 9th September 1917, aged 21. He is remembered with honour at the Menin Road South Military Cemetery.

SYDNEY LEWIS POWELL was born on 2nd October 1888 to William Powell and Susanna (nee Lewis) in Deptford. William was a prominent member of the Wesleyan church.

Sydney attended Kent College, a Methodist school at Harbledon near Canterbury, then joined his father and two brothers in the woollen trade. The family business, Powell & Lancaster, milliners, dressmakers and ladies outfitters were on the High Street.

Captain Sydney Lewis Powell, of the 16th Battalion Lancashire Fusiliers, was killed on 12th July 1917 aged 28. He is remembered with honour at Nieuwport Communal Cemetery.

JOHN STANLEY HORSFALL SHAFTO was born in Hunmanby Yorkshire, in 1883, to Reverend George Henry Shafto and Caroline (nee Holt). George was a Wesleyan minister who came to Bromley in about 1901 from Croydon.

Stanley attended Kingswood School in Bath from 1894 to 1896 before going to Truro College in Cornwall, where he was a keen cricketer. After leaving school, at 16, he joined the firm of Messrs Jackson, Purdey and Co. Chartered Accountants in London. By 1908 he was with the British Wall Paper Syndicate of Willesden and when war was declared he was Chief Accountant with a large business in Madras.

On returning home he joined the Sportsmen’s Battalion as a private, a little later obtaining a commission and was attached to the Buffs (8th East Kent). In June 1916 he received the Military Cross for gallantry, having rescued a man who had been blown out of his trench.

In August that year he was shot through the lung by a German sniper.

Second Lieutenant John Stanley Horsfall Shafto MC, of the 8th Battalion The Buffs (East Kent Regiment), was killed on 12th August 1916 aged 33. He will be remembered with honour at Bray Military Cemetery.

WALLIS SILCOX was born in Bexley, in 1892, to Nelson Silcox and Martha (nee Wallis). By 1900 Nelson had moved his family to Bromley and was working for W H Smith at Bromley South Station.

Wallis attended Aylesbury Road School and then Pitman’s Metropolitan School to study business. He spent five years with Messrs William Webb, solicitors, and was with Messrs Bradshaw & Son when he enlisted in the Royal Field Artillery in June 1915. On 6th November 1915 he married Edith Amy Owen.

In October 1917 Wallis was wounded in the head and died four days later without having regained consciousness.

Bombardier Wallis Silcox, of “A” Battery 74th Brigade Royal Field Artillery, was killed on 8th October 1917 aged 25 years. He is remembered with honour at Mendinghem Cemetery.

ARTHUR DONALD THORNTON SMITH was born in Anerley, on 16th November 1891, to Reverend Edward Thornton Smith and Anne (nee Wood). His father was a Wesleyan minister and came to Bromley in 1915 as Superintendent from the Sydenham circuit.

Arthur attended Whitgift Grammar School in Croydon and then University College School. He then worked for Glanvill, Enthoven & Co, LLloyd’s underwriters. He joined the Inns of Court O.T.C. in November 1915 and in August 1916 received a commission in the King’s Royal Rifles. In June 1917 he was awarded the Distinguished Service Order.