You are here: HomenextPlacesnextJohn Rylands and his library, Manchester

John Rylands and his library, Manchester 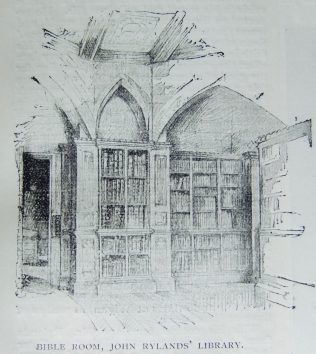 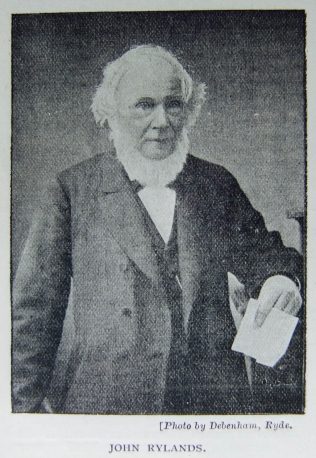 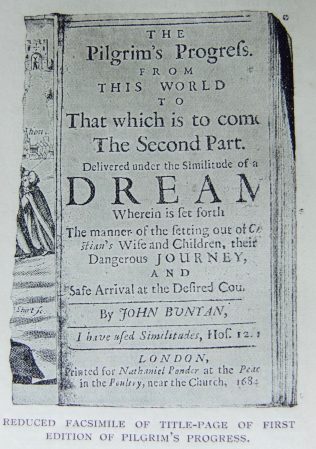 A Sketch in the Christian Messenger in a series, ‘God’s Stewards’ by Rev Geo. Armitage

By the death of Mr. John Rylands,  which took place on the 11th December, 1888, Manchester lost one of its most distinguished and most successful merchants. With his great business abilities he united a humble piety and a wise large-hearted liberality. His life is much more than a story of commercial success, ‘It is one of high unflagging endeavours for far more than mere personal ends consecrated by the fear and love of God, and dedicated to the best interests of mankind.’ He  delighted in business for business’ sake, and his mental endowments found congenial employment in the activities and contingencies of trade.

John Rylands was born in the then pleasant town of St. Helens, in Lancashire. His father was a thriving manufacturer on a small scale, and his mother was a descendant of the old family of the Pilkingtons. As the youngest of the children, John received her most careful training, and in after life he was ready to acknowledge, as in the case of most men who have risen to eminence, that he owed what was best in him to maternal influence and training. He received a liberal education at the local Grammar School, and to the end of his days he was ‘a humble lover of letters,’ and an earnest student. At the age of seventy he is said to have commenced the study of Italian.

As a boy he was full of life and humour, bold and brave and athletic, and a general favourite with his companions. On leaving school he entered into his father’s retail drapery establishment, and with this and the loom his father owned, he gained a practical and comprehensive knowledge of the trade. He early manifested his capacity for business, and made his first bargain when little more than sixteen. Entering one day into an auction sale, he bid to the extent of his pocket money for a drawer full of trinkets, and had them knocked down to him. Though they were found to be much tarnished and corroded, he pulled them to pieces, cleaned and polished them, and sold them separately, realising a handsome profit. A former nurse of his mother heard of the boy’s successful purchase, and being very handy at the loom, she said to him ‘Supposing‘, Master John, you spend this money in a little yarn, and let me weave it for you?’ This ‘was done, the cloth was beautifully woven, was soon sold, and all concerned made an encouraging profit. This process was repeated on a continually increasing scale for nearly two years, and the youth became already a miniature capitalist. The happy suggestion of this old nurse may be said to have laid the foundation of, and given the direction to, his commercial prosperity. Whilst thus carrying on his small manufacturing business on his own account, he assisted in his father‘s shop in the evening after his own work was done, and also earned a little pocket-money by ‘warplng’ for his father on a Saturday afternoon. At the end of two years he was joined in partnership by his brother Joseph, and John became the traveller for the infant enterprise.

The journeys in those days had to be undertaken on horseback, with the samples carried in the saddlebags. Gradually his journeys extended from the immediate towns and villages to Cheshire, Shropshire, and North Wales. The moral dangers on the road were even greater then than now. Everyone was expected to drink at the commercial table, and to pay his share. This youth of eighteen steadily refused. Once an ‘old stager’ of the road kindly took him aside. ‘Now let me give you,’ he said, ‘a word of advice, as you are the youngest of us: it will be bad for you to stand out and make yourself disagreeable to the rest.’ Sturdy John could not see it. Why should he do abroad what he would never have thought of doing at home? Therefore to all expostulations he replied: ‘For one thing I cannot afford it, and for another, if I muddle my brains with wine I cannot attend to business.’ He therefore went his own way, to the disgust of the rest, but as his after life proved, to nobility of character and to national fame.

In 1819 the father brought his capital into the firm of his sons and it was henceforth known as Rylands and Sons. Three years of prosperity succeeded, and a warehouse was opened in New High Street, Manchester. For the whole of the first week there was no custom, and the young merchant was fearfully depressed. Then a customer from Rochdale bought a parcel to the value of £20; ‘By God’s blessing, he thought, ‘we shall now succeed.’ As the demand for their cloth increased, dye and bleach works were purchased in Wigan, and afterwards handsome cotton mills were erected by their side. Subsequently this estate was found to contain most valuable thick seams of coal, and it became a source of great wealth to the firm.

The death of his revered mother marked a crisis in his moral and religious life. He reflected on the claims of the eternal world, and learnt that man shall ‘not live by bread alone.’ Soon after he made a public profession of his faith in Christ, and commenced to carry into effect the resolutions he had made to live for the good of others as well as his own. From this purpose he never afterwards swerved. He first united with the Baptist Church in York Street, but in after years attached himself to the ministry of Dr. Halley in the Congregational Church in Mosley Street and Cavendish Street, Manchester. The business as manufacturers and merchants continued to extend. Warehouse after warehouse was added to the Manchester premises. He opened mills at Gorton, and there found special opportunities to promote the welfare of his work-people. He instituted day schools, library, news-room, and religious services were conducted in one of the buildings. He entered into cordial relations with both his buyers and his salesmen by inviting them and their families to his homes at Gorton or Hoylake. He thus effectually won their regard. Eventually John Rylands became sole proprietor of the works and estates at Wigan, as well as of those at Manchester.

With his second marriage Mr. Rylands found a most earnest and efficient coadjutor in all his schemes for the welfare of his own workpeople, as well as his wider projects of philanthropy. He removed to Lonqford Hall, Stretford, near Manchester, but gave unremitting attention to the vast business which had grown up about him. He would stand in his office through the business hours of the day, holding in his hands the threads of the whole establishment. In times of business anxieties this Christian merchant understood how to ‘shut the door,’ and speak to his Father in heaven. A simple child-like faith in the power of prayer was carried into all his business matters. In 1873 the vast concern was formed into three limited liability companies, with a capital of £2,000,000. They give employment to about 12,000 persons, of whom 1,100 are in the Manchester warehouse, where in 1823 Mr. Rylands began the enterprise with the help of a man and a boy.

Many of Mr. Rylands’ largest charities were in secret. He did not give in conventional ways nor for conventional reasons. His gifts established an Institution for orphan girls at Greenheys, Manchester, and a Home for aged gentlewomen at Stretford. At Ryde a Home of Rest for ministers and their families sprang into beneficent existence through him. His gifts of books to struggling ministers and others amounted to many thousands of volumes. Large and well-stored libraries were opened at Stretford and at Havin Street, Isle of Wight. In both places coffee houses were provided for the refreshment and comfort of the people, and have proved effective rivals to the all too-powerful attractions of the tavern. At Stretford the Longford Institute with bowling green, tennis ground, children’s playground, also a large Town Hall adapted for lectures, entertainments etc., attest his sympathy with all innocent recreation. Among the latest acts of his life was the erection of Public baths for the same place. He acted on Christian principles in his constant unwearying munificence. In the disposal of his wealth he sought to honour Him who had given all. In an entry in an old book in faded ink, there is the following reference to the purchase of the Gorton mills: ‘This is a most important undertaking: a new era in my existence. If l am successful I promise to devote the fruits in the service of that Being who has been my Shepherd and has conducted me through devious tracts in safety.’ The love of Christ constrained him. The half of his great liberality will never be known. He died Dec. 11th, 1888, and was interred at the Manchester Southern Cemetery, in the presence of a large and representative concourse of sincere mourners.

Mr. Ryland’s name will be handed down in Manchester to future generations by the noble memorial building, with its precious store of books, which has been provided for the city by his devoted widow. The cost is estimated at £300,000, and the building was opened with dignified ceremony on Oct. 6th, 1800. By common consent it is one of the chief architectural glories of Manchester. The structure occupied some nine years in erection. It stands in the heart of the city, near to the Exchange and the Town Hall, yet its cloistered quiet is undisturbed by the noise around. The collection of books was begun by Mrs. Rylands about the year 1889, and was continued without intermission until the building was ready for their reception. In 1892 the celebrated Althorp collection, chiefly formed by the second Earl Spencer, was known to be obtainable. Mrs. Rylands at once secured it, and thus gave to Manchester a collection of books standing without a rival in the whole world. The Althorp Library itself cost Mrs. Rylands an immense sum – estimated somewhere between £400,00 and £750,000. The actual figure will probably never be known, for this beneficent lady followed the unostentatious methods of her husband. There is accommodation in the building for 150,000 volumes, and 60,000 volumes are already stored there.

A description of the merely leading features of this noble pile, or of some of its priceless treasures is here impossible. It is enough to say it possesses among other rarities the Latin bibles known as the ‘Mazarin Bible’ and the ‘ Pfister Bible,’ printed between 1450 and 1456. These claim to have been the first books ever printed, and they are certainly wonderful specimens of the printer’s art. The Althorp collection contains no fewer that fifty-one genuine Caxtons. The sumptuous production of the ‘Decameron,’ dated 1471, by the great Venetian printer, and which was bought in 1812 by the Duke of Marlborough for £2,260, finds its home there. Three fine manuscripts of Wycliff’s wonderful translation of the New Testament are there also. Altogether the building and its collection, as Dr. Fairburn declared at the inauguration, ‘adds to the dignity and the fame of the city.’

Nothing could be more appropriate to the great Manchester merchant than this handsome and valuable memorial. Throughout his life, Mr. Rylands had been a lover of books and especially of that one which makes ‘wise unto salvation.’ Once more we see the wealth of the merchant worthily devoted to the illumination of the mind, and the enlargement of the life of the people. High up between the windows of the vast celerestory a series of Latin inscriptions preach their silent lessons. One reads: ‘To live is to think.’ So Mr. Rylands always felt, and so his distinguished widow, by the erection of the John Rylands Library, proclaims.