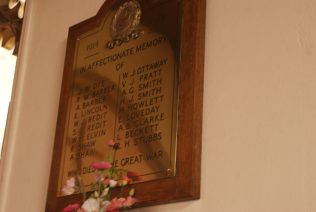 This war memorial does not refer to past members of this church.  It was moved there in 1956 when its original home was closed.  It belonged to St John’s Wesleyan Methodist Church, Attleborough and so the names on it are those of Attleborough Wesleyans.

Men from the Attleborough Wesleyan Church had enlisted in the Forces and sad news was heard of some of them. The church suffered as heavy loss as a result of the disastrous Gallipoli campaign in late summer 1915 when Sergeant John William Dye and Private Albert Shaw were killed on successive days in August. Both men had enlisted in the 1st/4th Norfolk Regiment and sailed in the HMT Aquitania from Liverpool to the Dardanelles.  Dye was 40 years old and left a wife and children. Shaw was 20.

Robert Shaw had joined up at the same time as his brother Albert and he too sailed with the 1st/4th Norfolks on the Aquitainia to the Dardanelles. He was killed there on 2 September 1915. He was aged just 19.

Another of the casualties at Gallipoli was Walter John Redit aged 22 who had ‘given his life for his King and Country at the Dardanelles’ and the Local Preachers’ Meeting recorded that it wished ‘to pay tribute to his high Christian character and service.’[i] He had been serving with the 4th Norfolk Regiment and had been killed on 19 August. He was a Local Preacher on Trial.

About the same time his older brother Joseph Arthur was reported to be missing. He had enlisted with the Royal Horse/Field Artillery in 1900 as a professional soldier and had subsequently served in France and Flanders.  He never returned home.

Then in December, their brother Sydney Charles Redit died of meningitis. He had enlisted only in October 1915 and almost immediately had become ill and had been transferred to the military isolation hospital at Aldershot.  He was 21.  Thankfully a fourth son, George, who had fought in France, returned safely to his family in Attleborough at the end of the war.

In the following January, news came that Alfred Lawrence of the R.A.S.C. had been killed in France, leaving a widow and children.

Edward (Mike) Lincoln who was serving with the 1st Norfolk Regiment in France and Flanders was killed in action on 4 June 1916 near Arras. He was 23. The following month Ernest Robert Elvin of the 8th Norfolk Regiment was killed at Delville Wood.  He had worked as a chauffeur prior to his enlistment.

In August Leonard Robert Beckett of the 1st Northamptonshire Regiment was killed leaving his four-year old daughter an orphan.  He is remembered on the Thiepval Monument.

More men from the church were killed in 1917. Walter James Ottaway of the 8th Norfolk Regiment lost his life in Flanders. Arthur George Smith of the Royal Field Artillery died of wounds in September leaving a wife and small children.  His two brothers were also fighting in France. Victor John Pratt was reported missing presumed killed in Egypt in November.  He was aged 22 and had been employed at Gaymer’s Cider Works before enlisting in the 1st/4th Norfolk Regiment. Robert Henry Stubbs of the R.A.S.C. served in France, Italy, Greece, Corfu and then died in Cyprus in December 1917. He was buried in the British Cemetery in Nicosia.

The slaughter continued into 1918.  Henry (Harry) John Smith, brother of Arthur George Smith, was killed in March. It had been impossible to retrieve his body and so his regimental disk was cut off. He had just returned to the front after two weeks leave at home on his discharge from hospital. Harry Howlett serving with the 11th Suffolk Regiment was killed in the Battle of the River Lys in April.

The church heard in August 1918 that Wilfred Harold Elvin, a signaller with the 1st Bedfordshires had been killed in action at Achiet-le-Petit. His older brother had been killed in 1916 and a further brother, Clement, was also in the Army. Wilfred had been a Local Preacher on Trial and his mother sent her appreciation to the Circuit Meeting and the church for all the letters of sympathy she had received.

Then just a month before the end of the war, Alfred Bruce Clark who had served in Salonika and later in France and Flanders, was killed at Guizancourt.  He was 21.[ii]