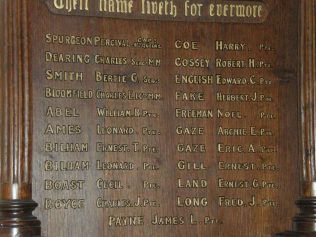 The first death of a church member from the circuit was reported in March 1915.  Private Lambert from Rosebery Road United Methodist Church in Norwich who had enlisted in the RAMC died from ‘spotted fever’ in Ipswich Hospital and was buried in Norwich cemetery.  The service was taken by the superintendent minister from Norwich, the Rev. Alfred Bromley.  ‘The Military authorities desired to honour our brother with a Military funeral, but in deference to the parents’ wishes, the matter was not pressed, and beyond the presence of a number of the Military, the interment was of a private character.’[1]

By September 1915, Lance Corporal G. Varvel of the 1st Battalion of the Norfolk Regiment was reported to have been wounded whilst Private W.H. Randell of the 3rd Battalion had been gassed.  In the April 1916 magazine, sympathy was extended to Mr Arthur Gunton on the death of his eldest son at the Front. Three months later the correspondent from the Adult School wrote,

‘it is difficult to realise (but there is unfortunately no hope to the contrary) that our old comrade Lewis Riches was one of the 5000 men lost in the sea battle of Jutland.  His cruiser was leading in the fight and from the commander downwards, every man gave his life for his country.’[2]

Only a few days previously, he had written to his friends in the Adult School responding to their greetings and saying that he had ‘had a jolly time on leave, but the time was too short.  Should have much liked a Sunday so as to have been with you at School.’

The following month, the magazine carried news of the death of Lance Corporal Frederick James Long, a former Sunday school scholar and member of the Band of Hope who had joined the army in the first week of the war.  He was blown up by a mine at Arras.  Leonard Ames of the Norfolk Regiment was reported to have been killed at the Somme on 1 July and his brother, Ernest, wounded.  After some weeks in hospital, he recovered sufficiently to return to light duties with the 11th Suffolks.  Two more old scholars and Ban