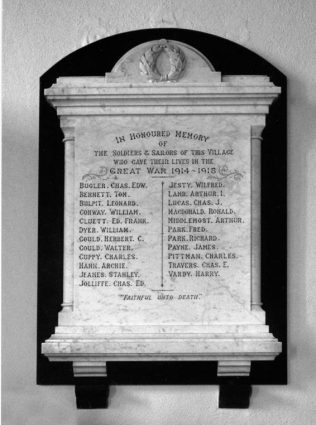 Founded in 1859, during the period when the Bristol to Weymouth railway line was being built, our chapel retains its original appearance.

We still have the original pews and an excellent pipe organ.  The built-on extension provides modern kitchen and toilet facilities, and a disabled access ramp has recently replaced the steep steps to the main entrance.

An important part of village history can be found on the East Wall inside the chapel.  Namely the original Village War Memorial for the 1914-18 war.

The story of this plaque, as related by previous members whose families (e.g. Hellier/Buckland/Dodderell etc) were involved in its installation, is very interesting.

A Village War Memorial to the 23 servicemen who fell during the conflict was required.  However the village could not agree on its location.  The Churchyard, the Village Green (central in the village) and inside the Parish Church were all proposed.

Time passed but the various factions could not agree.  As several of those who fell were from Methodist families, members of our church decided to place this memorial plaque on the East Wall.  For almost 60 years it became accepted as the official, and only, war memorial for the village and the venue for Remembrance Day services.

In recent years the numbers attending have exceeded the 80 seat capacity of our chapel, and it was agreed to hold the Remembrance Day services in the Parish Church, and name plates were located around the pulpit area.

It is now our custom to join with the village on Remembrance Sunday each year at St Andrews Church in Yetminster.

Names on the Yetminster War memorial