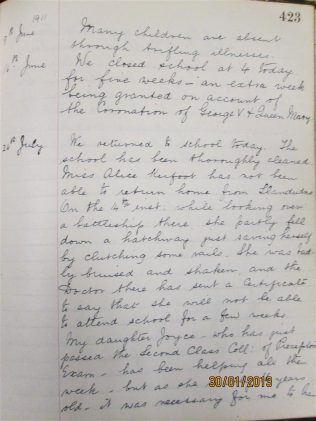 In March, Miss Goodall was ill and the school was managed by the Head of the Mixed Department, Mr Sandiford.

In June, an extra week’s holiday was granted for the coronation of King George V and Queen Mary.

The return to school in August was a difficult one with staff absence after Miss Kerfoot injured herself on holiday in Llandudno and Mrs Goodall’s grandmother, aged 93, died. She needed time off school to attend her funeral in Dumfriesshire, her home village.

The end of 1911 brought an epidemic of measles which severely affected the attendance once again.

On the 22nd December it is recorded that a young boy, George Croston slipped and fell in the lines and broke his leg. He had to be taken by cab to Leigh Infirmary. He was still in the infirmary after Christmas.

The national coal strike in March meant that the children were being fed at school and the school was closed for an afternoon so that the miners could take a ballot on strike action. The school did not close for Easter so that the children could still be fed. The holiday was postponed until the strike was over.

“Are you in favour of giving notice to establish the principle of a minimum wage for every man and boy working underground in the mines of Great Britain?” Ballot paper issued by the Miners’ Federation of Great Britain, January 1912.

On Page 433 of the log, Miss Goodall records the numbers of children attending for dinner. This carried on until the 19th April.

In February, Mrs Goodall’s daughter, Joyce, was appointed as an Assistant Teacher in an honorary capacity.

In early April, Mrs Goodall was taken ill and had to be absent from school till May.

In July, two additional days’ holiday were granted to commemorate the royal visit to Leigh of George V.

Miss Goodall recorded that school was closed on 15th December by order of the Medical Officer and had to be fumigated because of the outbreak of scarlet fever.

Empire Day was celebrated on 24th May in the morning followed by a half day’s holiday.

[For more than half of the last century, May 24, the birthday of Queen Victoria, was the day when almost a quarter of the world came to a halt to demonstrate their pride in being part of the British Empire. Millions of people stopped everything to salute the union flag, sing patriotic songs, listen to inspirational speeches and tales of “daring do”. The original idea of the day was to remind children of something it was felt they should never forget – that the strength of the Empire depended upon them. Youngsters loved it, though that probably had more to do with the fact that, on Empire Day, they were sent home from school early, missing lessons, so that they could take part in marches, maypole dances, concerts and parties.             Empire Day was not, in fact, introduced until after the death of Queen Victoria, the first one taking place on her birthday in 1902. It was not officially recognized as an annual event until 1916 but many schools across the Empire were celebrating it before then.]

In June 1918, Mrs Goodall wrote about being “stimulated to do still better work” after the visit of Miss Davies, the School Inspector who described the infant department as “well organised”.

On 11th April the children had a little tea to celebrate the marriage of Mrs Goodall’s son, George, who used to be a pupil at the school and then Leigh Boy’s Grammar School. He was now British Vice Consul at Colon Panama.

Mrs Goodall recorded in the log book that preparations were being undertaken for the Peace Festival. This was to celebrate the official end of World War I.

[It is still often forgotten that the First World War did not officially end on 11th November 1918. In Britain the Peace Committee met for the first time on 9th May 1919, with Lord Curzon, Foreign Secretary in charge. Curzon, who loved pomp and ceremony, outlined a celebration running over four days (tentatively pencilled in for the beginning of August), including a Victory March through London, a day of Thanksgiving services, a river pageant, and a day of popular festivities].

“Today I complete 20 years’ service in this school. I can truly say that notwithstanding the fact that most of the children come from homes where the environment is far from being good or helpful, that long period had been exceedingly happy to me. There have been many changes in the matter of school methods; and though there is still “no royal road to learning” teachers and scholars have a bright and happy time here.”

“The children have long looked forward to the day when their mothers might come to look at some of their work and watch them at their games. At 2:30, 24 mothers, most of them with young children visited the school and seemed greatly interested in the way the children told them their stories- expressed as they were by little dolls which they moved about as the various actions were described. The Infirmary story and model gave great satisfaction. The mothers were regaled with afternoon tea. “

The school year ended on March 31st and this was the final entry in the first Infant Department Log Book.

The new log book commences on April 12th and the new school year began with an outbreak of chicken pox.

On October 18th she recorded the start of a coal strike and on subsequent days children were absent because they were out picking coal.

The year ended sadly for Mrs Goodall who on the 31st December, New Year’s Eve, received a telegram from Earl Curzon, Foreign Secretary for State informing her that her son, George Goodall, British Vice Consul at Guatemala had died from typhoid fever.

George, aged 11, had come with the family to Westleigh when his mother had been appointed the Headmistress of the Infant Department in January 1900. He was a scholar in the Mixed Department, and then attended Leigh Boy’s Grammar School. He obtained, through private study, whilst working for the Leigh Education Committee, a first class Bachelor of Honours Degree in Arts.

He then worked within the Civil Service and later the British Consular Service. He became Vice Consul in New Orleans and later in Colon, Panama and then at Guatemala.

Before going abroad, he was accredited as a local preacher.

He left a widow and a little daughter, also called Joyce, aged 6 months.

In January she noted that she had been headmistress for 21 years and was now teaching the children of the children she taught. She reflects:

“In reviewing the past, I am bound to admit that this neighbourhood has not improved, but rather degenerated, many children being cruelly left by the parents who attend the cinema. I am thankful that I am still quite fit and enjoy school life more than ever.”

On March 1st the mothers were invited to the school for Mother’s Day and afternoon tea was provided.

By April children were still being fed at school for 6 days a week because of the miner’s strike.

Poor attendance because of coal picking and sleepiness was still a problem, but by July, the strike was over.

At the start of summer time, Mrs Goodall noted how many children were tired because of playing out late at night. After one boy fell asleep in hymn practice she wrote a stern letter to all mothers.

In March, she recorded how successful the Mother’s Day celebration had been over the last few years. It gave her a chance to meet the mothers and give them words of encouragement and advice. In fact, she stated that the children’s appearance improved after each of these events.

In 1925, in an article about the school’s Mother’s Day celebrations Mrs Goodall was quoted as saying:

“Mother’s Day has greatly improved the interest of the parents in our school, strengthening the bond between us”.

From May, needy children were provided with a school dinner. Volunteers came in to serve dinners. Once again, the miners were on strike.

On February 29th, Mrs Goodall resigned her position of Headmistress after 28 years’ service.

“In reviewing my long experience here, only one sentiment fills my mind and that is deep gratitude to the kind providence that enabled me to continue in the work that I have loved with unabated strength, enthusiasm and zeal, to the very end. I pray that the school may be greatly increased and prosper in the future.”