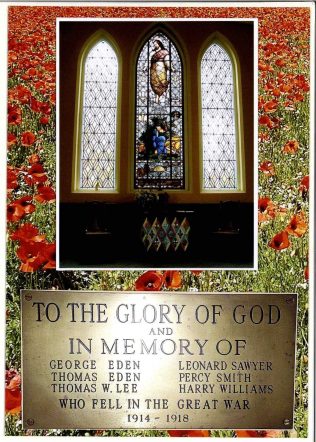 George Eden attended Halesowen C of E school and was a regular soldier with the Worcesters in 1914. He was in the 3rd Battalion and was sent to France with the British Expeditionary Forces on the 12th August. He was at Mons to face the first German advance and took part in the retreat which took the army back to the Marne. The German forces were then obliged to retreat to the Aisne where several important actions were fought. In one of these on the wooded heights above the river a contested German advance led to many casualties. Among those killed in action on the 21st September was Lance Corporal George Eden. He is commemorated on the La Ferté-sous-Jouarre Memorial and on the Halesowen, Short Cross Methodist Church and Halesowen C of E school Memorials. His brother, Thomas, enlisted in the Royal Engineers and died on the 9th April 1917.

Thomas Eden attended Halesowen C of E school and was living in 1914 with his wife, Elsie, at 49 Windmill Hill, Cradley. He was a coal miner at Harper and Moores and, when he was informed that his brother, George, had been killed in action on the Aisne in 1914, he enlisted in the Royal Engineers in November 1915 and was posted to the 257th Tunnelling Company. This unit was in the Neuve Chapelle area engaged in the highly dangerous activities associated with mining under enemy lines. In July 1916 he was gassed and returned home until January 1917. He went into the front line again in late March and died from drowning on the 9th April when the gallery he was working in was flooded. Sapper Thomas Eden was 29 years of age and is buried in the Rue du Bacquerot Cemetery at Laventie (III A 16) and commemorated on the Cradley, Halesowen, Short Cross Methodist Church and Halesowen C of E school Memorials. His brother, George, was a regular soldier who was killed on the Aisne on the 21st September 1914.

Thomas Lee attended Halesowen C of E school and volunteered for the Halesowen Company of the Worcester Territorials before 1914. They went overseas with the 1/7th Battalion in April 1915 and saw much action in the next two years in Artois and on the Somme. He was a fine soldier and had been promoted to Lance Sergeant by 1917. In the summer of this year the Worcesters came back into the front line for the October battles of Third Ypres. At great cost the German troops had been pushed back some way towards Passchendaele and on the 9th October began the Battle of Poelcappelle. A mile to the south of the village and in pouring rain and deep mud the Worcesters attacked at dawn. They made initial progress but the conditions prevented mobility and many died under fire. Among those killed in action was Lance Sergeant Thomas Lee. He is commemorated on the Tyne Cot Memorial and on the Halesowen, Short Cross Methodist Church and Halesowen C of E school Memorials.

Leonard Sawyer was the son of Joseph and Sarah Sawyer of 46 Bloomfield Street, Halesowen. He enlisted in the Northamptons and was sent to the 2nd Battalion. They suffered severely in the first German Spring offensive of March 1918 and were forced into a retreat as far as Amiens. So many were lost that the remnants and reinforcements were sent to the Aisne, a quiet sector of the French line. However, the third of the German Spring offensives was about to fall on this area and the Northamptons were on the tip of the salient protecting the river and the city of Reims. The attack arrived on the morning of the 27th May and drove back the British forces for nearly 20 miles. The advance was eventually stopped and the German plan foiled but, once again, at the cost of a great number of troops. They included Private Leonard Sawyer who was killed in action on the first day of the battle. He was 28 years of age and is commemorated on the Soissons Memorial and on the Halesowen and Short Cross Methodist Church Memorials.

Joseph Percy Smith came from Halesowen and volunteered for the Warwicks. He joined the 10th (Service) Battalion, which saw action on the Somme and in the Third Battle of Ypres. In early 1918 the Warwicks were in the front line for the first of the German Spring offensives. On the 21st March they were at Velu in Picardy to the east of the Somme and experienced the great Bruckmuller barrage at 4.20 a.m. They and their neighbouring battalions fought a defensive battle for two days but were unable to resist on the 23rd. The German forces were too great and on this day Private Percy Joseph Smith was killed in action. He is commemorated on the Arras, Halesowen and Short Cross Methodist Church Memorials.

Harry Williams came from Halesowen and attended King Edward’s School, Stourbridge. He enlisted in the Worcesters and was sent to the 10th (Service) Battalion which went to the Western Front in 1915. It was heavily engaged in the Battle of the Somme in 1916 and was again in the trenches for the Battle of Messines on the 6th June 1917. The Worcesters then moved to Ypres to take part in the central phase of the Third Battle of Ypres, fighting notably in the Battle of the Menin Road in September. In December they took over the dangerous front line near Cambrai after the Battle of Cambrai had finished but Private Harry Williams was killed on the 10th December, the day the Worcesters arrived. He is buried in RibecourtCemetery (I B 18) and commemorated on the Halesowen, Short Cross Methodist Church and King Edward VI College, Stourbridge, Memorials.

The window was designed by Paul A. Mantle,  and it was executed by H. Hope and Sons of Smethwick.  The  cost was met by Mr and Mrs Joseph Parsons and unveiled on February  26th 1928.  Originally it was in the old church but when the present church was built  in 1934 it was moved to its present position and forms the focal point above the  communion area.

Paul Mantle  explains his design: The main theme of the window has been based on the  words of the inscription, and presents the sorrow of mankind and the hope of the  resurrection.   The six motifs in the side panels express the Anchor  of Hope, the Mirror and Lamp of Truth and Light, the Book and Scroll of  Knowledge and the Tree of Life.  The Air Force, Army and Navy are  represented at the bottom by the Eagle, Helmet, Rifle, Sword and the Anchor  respectively.   The bowed figure of Victory, with the wreath laid on  flowers – emblems of eternal life  – suggests the grief and tragedy of  war.   The olive tree – symbol of peace – is rising from the  weapons of strife – the shield, sword and helmet.  Continuing the original idea is the ascending figure of Christ, showing  the triumph of Life over Death.  The hands are extended in benediction,  giving the assurance that “souls of the righteous are in the hands of  God.”