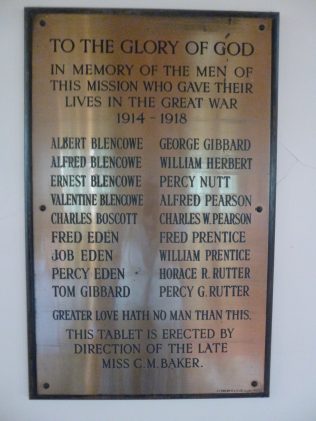 Neithrop Methodist Church in Banbury has a Memorial Bronze plate on the right hand wall at the Pulpit end of the Chapel.

The plate was the gift of the late Miss Baker and it was unveiled at the Jubilee Celebrations of the Church on Sunday 10th April 1938 after the church had been renovated inside and out at a cost of £200.

The ceremony was conducted by Rev E..J Bennett Richards, who was  Minister of the Church between 1915 and 1918 and who knew most of the men remembered.

The inscription on the Bronze plate reads:

The names of the eighteen men who made the supreme sacrifice are;

Underneath is the quotation

“Greater love hath no man than this.”

All the above was reported in the Banbury Guardian on Thursday April 14th, 1938.