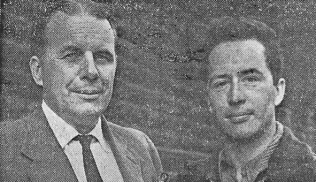 Methodism had started to think about the Central Halls again when the 1962 Conference brought into being the Central Missions Committee, which was to direct money into struggling causes and to train men for Central Mission work: the new probationer at Eastbrook in 1964, the Rev David Copestake, was one such minister.  Eastbrook at this time was one of the biggest congregations in the country.

In 1964 the then Bradford Institute Of Technology was growing and gaining in importance, soon to become one of the Technological Universities with Mr Wilson as Chancellor, also there were important Teacher Training Colleges, and although students had come to Eastbrook in Dr Barnett’s time, Mr Thewlis felt it was time to put the student work on a more organised footing.  Giving the job to his probationer Minister, the Rev David Copestake, it was decided to try and start a ‘Bradford Student Methodist Society’ or better known as ‘Meth Soc.’.

David Copestake took a stall at the freshmen conference at the Institute and invited students to go to the Eastbrook Hall on the following Sunday afternoon.  Somehow a message was placed into the Teaching Colleges and into the School of Nursing.  Some 50 or 60 students turned up on the Sunday afternoon, when they met in the old senior schoolroom.  It was decided to start a Meth Soc. with the Rev Davis Copestake as acting Chaplain, which would meet on a Sunday afternoon followed by tea and then go in together to the evening service in the Hall.  Mr Thewlis spoke to the first meeting about the history of the Central Halls and in particular about the history of Eastbrook; this was followed by a tour of the vast building, which was quite an experience for some of the students who had come from ordinary town or village chapels.

After two weeks, the Mission Leaders Meeting agreed that ‘Meth Soc’ could meet in the Church Parlour, a very nice room above the Crush Hall, just to the back of the gallery, a room complete with its own kitchen.  It was here that the students met every Sunday during term time, listening to a large variety of speakers.  Any special preachers at the Mission were asked to speak to Meth Soc in the afternoon, stay for tea with the students and then to preach in the Main Hall at 6.30pm.