You are here: HomenextChapelsnextSurreynextFarnham Methodist Church 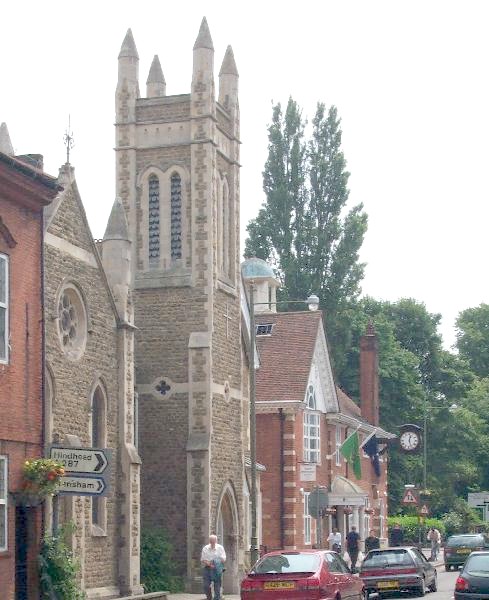 References to Methodism in Farnham start in 1830.

When Farnham Station was connected to Waterloo in 1870, it was decided to build a new road from the town centre to the station. So Farnham’s Wesleyan Methodists bought some land and built their church on this new road called South Street. Their church opened in 1875, about the same time as a Primitive Methodist church close by in Union Road.
1932 was the year that three divided strands of Methodism united in The Methodist Union. In Farnham, this had the effect of uniting the Farnham Wesleyan Methodist Church with the Farnham Primitive Methodist Church. The Prims closed their chapel and today’s Farnham Methodist Church was born. It would be very interesting to know the way this union operated and if it was harmonious. We think it went quite well as there are no stories about major disagreements.

A new national circuit organisation was agreed. It reconfigured the Wesleyan structure which had Farnham joined to Aldershot in the Aldershot & Farnham Circuit. The new circuit structure defined Farnham and the local village chapels as part of the Farnham & Alton Circuit. Thus, a new circuit was born and operated as such for 80 years until 1 September, 2012 when there was a circuit reorganisation and the new Hants-Surrey Border Circuit was created.

During the 80 years to 2012, Farnham altered its interior significantly to meet changing needs. Under ministers Arthur Bailey, Ralph Kirby, Brian Whitlock and Malcolm Groom the church carried out important improvement projects, including a complete replacement of the roof. Under Vida Foday the church embarked on a programme to replace most of the windows. All of these alterations took place with the strong and vital support of the circuit.

Many important alterations took place, with the strong and vital support of the circuit, during the year when an Australian Minister, Rev Brian Whitlock, was seconded to fill a year when a gap occurred when the incumbent minister retired due to poor health.

The financial challenges that followed the Whitlock year were even greater. Again, the circuit played a very big role in helping with the funding of the roof and new toilet facilities.

Sunday School was always a major part of the church. It was large in the old days, probably approaching 100 children in the years before the war, judging by some photographs. In the post-war years it was also big by today’s standards. In the 1950’s it was at least 50 children and run by the legendary Bill Walker, a school teacher with masses of energy and a fearsome reputation. Highlights of the year for the Sunday School were two circuit events – the Summer Sports, bringing together all the Sunday Schools in FarnhamPark, and, in later years, the Circuit SS Quiz evening.

The 1st Farnham Company of the Boys’ Brigade was started by Jack Mayhew in the Congregational Church in 1942 but, in 1952, it was agreed between churches that they would transfer to the Methodist Church. This move had a big impact on the life of FMC and several boys from the early years became church members and very active in church life. It is good that, although we sadly no longer have BB due to the difficulty of finding leaders, we do have a very active Girls’ Brigade.

For a period from 1957 till the 1970’s, Farnham had a large youth club. It started as a girl’s club led by a grammar school teacher. In 1957 she approached the Captain of the Boys’ Brigade to ask if three of its members would like to take part in a short one-act play. Three of the boys duly went along every Monday evening for rehearsals. Although the play never materialized, Farnham Methodist Youth Club did, and in the following December it became a full member of the MAYC. Several marriages came from the youth club.

In 1940 a Mothers’ Club was formed and over the years the name changed but eventually it was called the Wednesday Fellowship. They became a pillar of the church and worked hard, raising money for Church funds and other causes. This meeting sadly closed in the late nineties owing to most of the members being in their late eighties.

In 1964 another women’s group was formed calling themselves the ‘Over 20’s’; this being in the evening rather than the afternoon. In 1967 they changed their name to ‘Young Wives’ where, among other activities, they did the catering at the Bazaar and the Harvest Supper. In 1970 they became known as ‘The Young Wives Group’. But eventually they were no longer young and they are now known as the ‘Wednesday Forum’ — and continue to meet monthly in the evenings.

There is an active Action for Children Group which raises over £3,000 a year. This group was formed in 1925, before our circuit was created, so it has been going for many years.

Until the 1990s, there had always been a choir that practised every Friday evening. The choir was probably at its peak in membership and musicianship the 1950s. The organist then was an outstanding musician called Stanley Wilkins who had been awarded a scholarship to the Conservatoire de Paris but declined it to pursue a career in the Post Office! He did well at that also and was Farnham’s Head Postmaster.

Farnham has had over 40 ministers since it was founded in 1875.  One of our ministers was to become internationally famous; – the Rev. Leslie Weatherhead, was renowned for his preaching, writing and approach to healing. His first ever appointment was as minister to Farnham Wesleyan Methodist Church in 1915, then aged only 22. He left to serve in the First World War and his name appears on our memorial board in the chancel as one of our church who served. He was President of Conference in 1953.

What does Farnham Methodist Church do today?

There are still several areas of activity, despite the depleted membership, now down to about one third of its level in the 1950’s.

We have monthly Silver Services on Thursday afternoons for a congregation drawn mainly from non-members. The monthly Sunday Lunches are a popular feature. We have started to have regular MessyChurch which is working well and proving popular, particularly with young people. There is a computer activity every Wednesday morning, bringing in a variety of outside people.

Farnham Methodist Church has been greatly blessed over a long period with a succession of highly motivated and willing leaders and members. It has faced many challenges and, today, faces many more.

God has blessed our church in many ways and through many channels. We thank him for the many blessings he has brought through our church to hundreds of people over the years. We seek his guidance in tackling the present and future challenges.