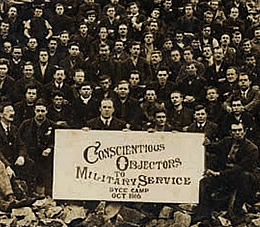 My father, Sam Richardson, was a conscientious objector during the Second World War and served with the Christian Pacifist Forestry and Land Units, at Micheldever (Hants), Downton and Mere (Wilts). He was a local preacher while serving  with CPFLU, and I recall as a child in the fifties returning with him when he preached at an Anniversary in one of the churches (probably Woodfalls) where he had preached during the war and kept in touch with friends. After the war he returned to teaching and spent over 30 years teaching at Toynbee School in Eastleigh, Hampshire, specialising in what was then known as “remedial” but would now be called “special needs”.

It is only recently that I have realised, from reading the history of the Units by Lewis Maclachlan, how significant was the spiritual aspect of the life of these small groups of COs working and living together – my father’s stories were much more about rat catching and ditch digging!

I shall try to watch the live streamed service tomorrow.

Greetings
My father was a CO during the 39-45 war. He spent the war years as a farm labourer and we took other COs as lodgers into our home – a nest of pacifists! We went to a tiny village chapel where my parents started a Sunday School, and my father was a local preacher in the Tadcaster Circuit. The chapel closed shortly after the war, a few years after we returned to Halifax.
Having been surrounded by pacifists, with the strange letters FOR and PPU to puzzle over, not surprisingly, I also rejected militarism and I registered as a CO when called for National Service.
National Service ended 52 years ago, but this Government is encouraging schools to have Cadet groups – indoctrination which we should condemn.
Shalom
John M Hoyle (now in the Nene Valley Circuit)

My name is Rev.Derek North,now retired but my Dad was a conscientious object in WW2.
His name was John North(known as Jack North) and he lived at Mellor,nr Blackburn,Lancs.
His father cpl John James North was “reported missing presumed killed 21 March 1918.
I still have his NCC epaulette (somewhere).
Hope this is the sort of info. you were looking for.
Best wishes.
Derek

Just to say my father R.O. Roberts was a conscientious objector in the Second World War on religious grounds and long time member of Fellowship of Reconciliation. In the event I’m not sure health would have permitted him to serve for long any way as he spent the last year and a half of the war in a TB Sanatorium in North Wales – probably linked to an impoverished upbringing on a hill farm where his family were tenants later evicted . Before that he had been allowed to do some civil service work in London based around Chatham House(later evacuated to Oxford) which he was able to square with  his conscience. Thank you for putting on the service at Englesea. I have not been in a position to have to make decisions like this, but did take severe issue with a poem in local church magazine for Remembrance Sunday which rubbished peace protestors, poets etc saying it was soldiers not the former who had kept the peace….!