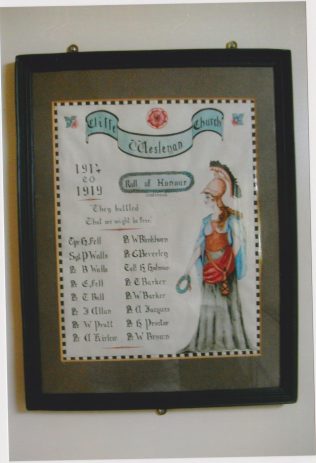 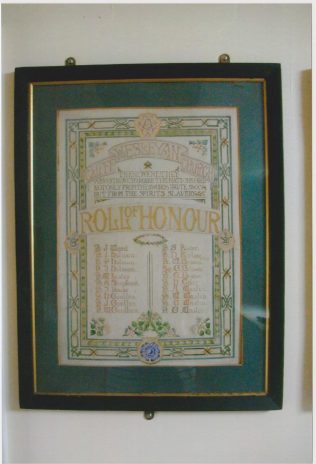 The two Rolls of Honour from Cliffe ex-Wesleyan Methodist Church, which closed in 1969, are now housed in the Village Institute, which stands alongside the Selby to Howden road (A 63). The first one bears the quotation:

These were they who strove to make the nations free,

not only from the swords brute sway but from the spirits slavery.

The second (a continuation) has this caption:

It is thought that these two framed Rolls of Honour, which have a total of thirty six names on them, were designed by two relations (mother and sister) of  Mr. Sandy Jacques, who was a fast bowler in the 1920s Yorkshire County Cricket Team. Against one name, Pt.N.Kirlew, is written the word ‘killed’.

On the reverse of one Roll of Honour, Mr.Jacques has added that Pt.W.Lister died.

It is also known that Pt.W.Waslin was killed at Gallipoli. He was brought up in Cliffe, and emigrated to Australia where he joined the Australian Forces.