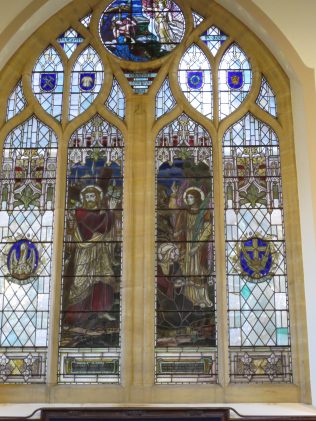 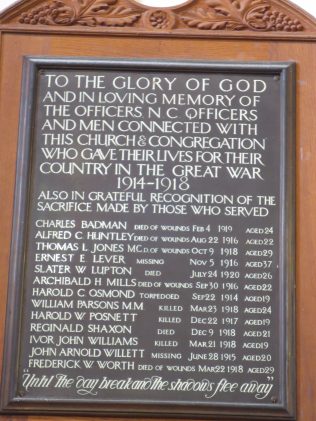 Many churches have war memorials in memory of those who died in the two world wars.  Victoria Methodist Church has two plaques containing the names of those members of the church who died in the Great War of 1914 – 1918 and the Second World War of 1939 – 1945, but, besides the plaques, Victoria may be unique in that it also has a strikingly beautiful stained glass window dedicated to those who died in the Great War. How this came about starts with a terrible fire which consumed the original 1900 Victoria Church on the morning of Monday 5th February 1934.

The church was still new in many people’s minds and much loved, and whether to restore the existing church or start afresh led to many arguments which were only resolved when the Urban District Council took the opportunity to widen the road outside the church, making restoration impossible.  Herbert (Ted) Huntley was the Trustee’s secretary in 1934 and became secretary to the Building Committee, charged with the task of building a new church.  When it came to commissioning the new stained glass windows for the church, the memory of that terrible war, which ended only 16 years previously and which had changed people’s lives forever, must have still been on the minds of all the Committee members.  Especially for Ted, since his brother Alfred had been killed during the war, aged 22, along with many of his friends from the church: