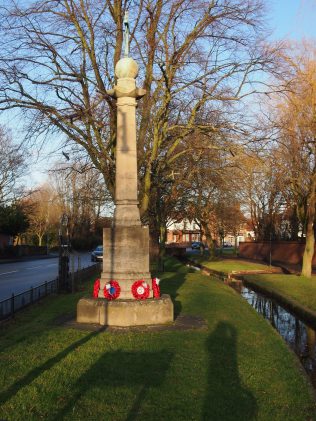 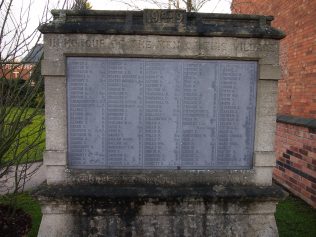 As in many villages there is a war memorial on the village green, next to the parish church. This lists the 22 men of the village who died during the conflict.

The East Leake War Memorial Committee also chose to set up a roll of honour, listing the 125 men who served, and in February 1920 they asked the Trustees of the Wesleyan Methodist Church if this could be erected on their chapel grounds, which face onto the Main Street of the village. The Trustees unanimously gave approval. Their successors, the current Church Council, have agreed to renovate the Roll of Honour during 2014.

The proportion of dead to survivors is consistent with the men having served on the Western Front.

Because of the location of the two memorials, the Baptists were the only denomination in East Leake to separately commemorate their war dead, as can be seen in the notes on dead which follow. One Wesleyan Methodist has, however, been identified. Private Herbert Whitby was baptised in the Wesleyan Methodist chapel, and was the son of one of the Trustees.

Born in 1894, Herbert Arthur Whitby was the son of Arthur and Eliza Ann Whitby. At the time of the 1911 Census he was living with his family in West Street, East Leake and employed as an office boy at the Empress Steel Works in Loughborough. He was apparently judged unfit for military service, but volunteered for the Royal Defence Corps, who were a predecessor of the Home Guard. He died at Greenwich on 29th June 1916 at the age of 22, presumably of an existing medical condition.