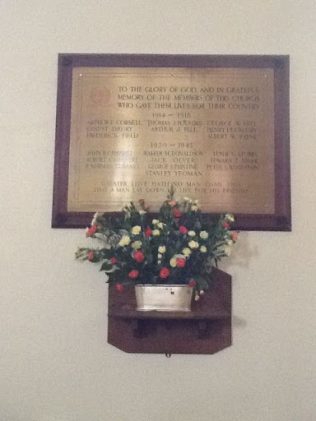 High Street Methodist Church was opened in 1930 after the congregation outgrew the Wesleyan Chapel in Leyton Road, Harpenden. The War Memorial, commemorating the dead of both World Wars, is mounted on the wall of the North transept.

The following information is based on a leaflet produced by Peter Syson (with the help of Eric Brandreth) for the Service of Remembrance on 9th November 2008. (Additional research by Pamela Atkins.)

Born in Bedford, Arthur Earnest Cornell was one of nine children born to railway signalman William Cornell and his wife, Annie, who lived on Cornwall Road, Harpenden. Arthur was a printer’s apprentice and a member of the choir at the Wesleyan Church.

Arthur joined the 7th Battalion of the Bedfordshire Regiment and became a sergeant. He was killed in action on the Western Front on 1st July 1916, aged 22, and is commemorated on the Thiepval memorial in France.

Ernest was the son of railway signalman Robert Drury and his wife Sarah who lived on Station Road, Harpenden. Before the war, Ernest worked as a mixer in a rubber works and was a member of the choir at the Methodist Church.

Ernest joined the 6th Battalion of the Bedfordshire Regiment, becoming a lance corporal. He was wounded in France on 9th July 1916 and recovered, only to die of tuberculosis on 13th May 1917. Ernest was buried in St Nicholas’ Churchyard, Harpenden, following a service at the Methodist Church.

Born in Harpenden, Frederick Thomas Field was one of thirteen children born to John and Sarah Field. John was a railway platelayer, but Fred worked as a packer of straw hats as well as being a Sunday School teacher and Wesleyan local preacher.

Fred joined the 8th Battalion of the Bedfordshire Regiment and was killed in action on the Western Front on 15th September 1916, aged 37. He is commemorated on the Thiepval Memorial in France.

Thomas John Fouldes was the son of a diamond merchant, John Fouldes, and his wife, Mary, who lived in Douglas Road, Harpenden. He was Secretary of the Wesleyan Sunday School and organised the retirement party for Henry Salisbury in 1911 at which a silver rose bowl was presented.(see here). In 1917, he married Lydia Washington-Gray.

Thomas became a captain in the Royal Field Artillery, was mentioned in despatches, but was killed in action in Greece on 25th June 1918, aged 26. He is buried at Karasouli Military Cemetery.

Arthur James Hill, like his father George, was a horseman on a farm before the war. His mother was called Elizabeth and they lived in Station Road, Harpenden.

Arthur joined the 1st/5th Battalion of the Bedfordshire Regiment and was killed in action in Palestine on 2nd November 1917, aged 29. He is buried in the Gaza War Cemetery.

The younger brother of Arthur (above), George William Hill worked as a domestic gardener before the war.

George joined the Hampshire Regiment and died of pneumonia in Salonika on 8th October 1918, age 26. He is buried in the Mikra British Cemetery in Kalamaria, Greece.

Henry was the son of bricklayer Walter Hucklesby and his wife, Lizzie who lived on Station Road, Harpenden.

Henry was a private in The Duke of Wellington’s (West Riding) Regiment and died on 10th April 1918, aged 21. He is commemorated on the Tyne Cot Memorial in Belgium.

Albert was a private in the Queen’s(Royal West Surrey) Regiment. He died of meningitis whilst undergoing military training on 28th May 1918 and is buried in St Nicholas’ Churchyard, Harpenden.

John Bennett Campbell was the son of James and Margaret Campbell. He married Olive Hutton early in 1941 and they had a daughter. When John was killed, the High Street Methodist Church newsletter expressed its sympathy for Olive and her daughter as “her husband so young and blithe, has made the great sacrifice”

John was a trooper in the 2/5th Battalion Gloucestershire Regiment and was seconded to the RAF Reconnaissance Corps. He died on 7th August 1944 and is buried at La Bigne Churchyard in France.

Albert joined the Royal Artillery and was attached to 656 AOP. Squadron, RAF, as an air operations pilot. He died on 29th November 1944, aged 24 and is buried in Kirklee War Cemetery in India.

Percy Norman Currant lived on Elliswick Road and was the son of Percy and Annie Currant. He married Beatrice Emily Sugden in the summer of 1939.

Norman joined the Beds & Herts Regiment. He was attached to the 7th Battalion Seaforth Highlanders and attained the rank of major. He died on 14th August 1944, aged 35 and is buried in Geel War Cemetery in Belgium.

Walter Murray Hourston Donaldson was the son of Walter and Eleanor Allan Stewart Donaldson of Harpenden.

Walter joined the Royal Navy and died, aged 22, on 24th May 1941 when HMS Hood was sunk by the Bismarck, with the loss of 1500 lives. He is commemorated on the Portsmouth Naval Memorial.

Jack Alfred William Olver was the son of Albert and Beatrice Olver of Harpenden. He worked as an assistant in the Chemistry department at Rothamsted Experimental Station. According to the Church newsletter, Jack had ”a special place of affection” at High Street and its Sunday School.

Jack died on 17th January 1941, aged 20, when the steam passenger ship Almeda Star was sunk by a German U-boat in the North Atlantic. He was a Leading Airman in the Fleet Air Arm and was en route to HMS Goshawk, the FAA base at RNAS Piarco in Trinidad. He is commemorated on the FAA Memorial at Lee on Solent in Hampshire.

George Sharman Painting was the son of George and Gertrude Painting of Victoria Road, Harpenden.

George enlisted in the Royal Army Ordnance Corps. He died, aged 27, on 17th December 1941, following a long illness. A memorial service was held at High Street and he was buried in St Nicholas’ Churchyard.

Leslie George Leopold Stubbs was the son of Leopold and Clara Stubbs.  He worked in the Primary Department of the Sunday School at High Street, was a member of Toc H and a King’s Scout.

Leslie was a pilot in the RAF Volunteer Reserve and was killed on 7th December 1942 while on active service in Africa, aged 23. He is buried in Harare (Pioneer) Cemetery in Zimbabwe.

Edward Thomas Viner was the son of Charles and Elizabeth Viner. He married Edna Fountain in the spring of 1941. He had been a member of the Sunday School at High Street and also in the Scouts.

Edward was a Lance Corporal in the Sherwood Foresters (Notts and Derby Regiment) and died on 31st January 1942, aged 23, in Singapore. He is buried in Kranji War Cemetery.

Peter Stanley Woolston was the son of Arthur and Daisy Woolston. He had been Sunday School Secretary at High Street and was due to marry  Miss Letty Walker in September 1942.

Peter was a Flight Sergeant in 88 Sqn RAF Volunteer Reserve. He was reported missing on 19th August 1942, aged 20, and is commemorated on the Air Forces Memorial at Runneymede in Surrey.

Stanley Richard Yeoman was the son of John and Gertrude Yeoman of Station Road.

Stanley was in South Africa, training to be a pilot in the RAF Volunteer Reserve, when he was killed on 24th April 1943, aged 20. He is buried in Harare (Pioneer) Cemetery, Zimbabwe.

Greater love hath no man than this

that a man lay down his life for his friends