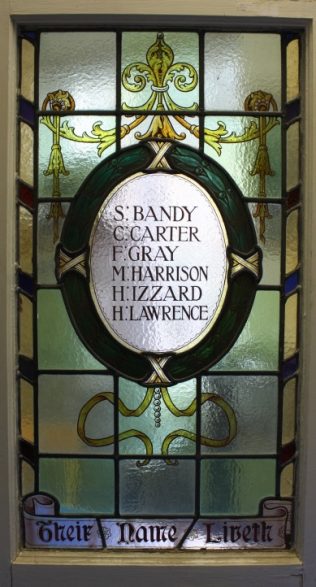 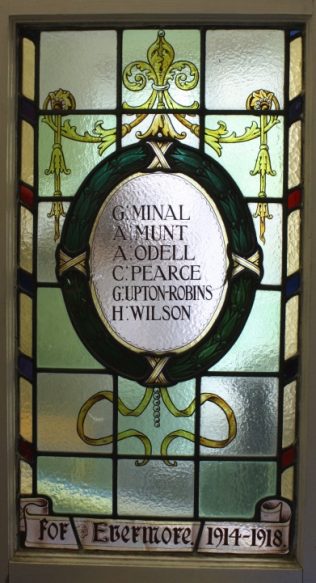 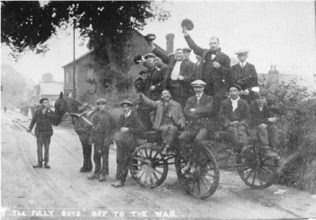 zoom
"The Folly Boys Off to the War"
click to enlarge

The Folly is an area of old houses built half a mile outside Wheathampstead village centre. It would at one time have been cheap workmens’ dwellings. Not so now as the houses have been modified and upgraded to become desirable residences. Alongside the road out of Wheathampstead towards Luton was the site of the Folly Methodist Chapel, built 1887.

It housed two stained glass windows in memory of the boys from the Folly who died in the First World War. There are no details in the chapel minutes to tell us how the names were draw up or indeed when the windows were fitted. It was certainly well after the First War as one of the men who died from war injuries, did not die until April 1921.

The chapel was demolished about 2006. The windows formed part of the general recyclable building material and were advertised on eBay. They were bought for £120 by a lady who thought it an absolute tragedy that these men, who had fought so bravely, and of whom the windows said that ‘their name liveth for evermore’, were obviously not being remembered. She held on to them for some years, trying to find an appropriate home for them, and eventually heard about our War Memorial Project and offered them to myself and then to St. Albans City Museum where they now reside.

The names listed on the Folly Methodist Chapel Memorial Windows.

Sidney Bandy
Died 15th April 1921. Husband to wife Maud and father of four children. Discharged 1919 as medically unfit. Died a lingering death probably from TB. He will be remembered on a new plaque to be added to the Wheathampstead War Memorial.

Cyril Carter
Died 26th November 1914 on board HMS Bulwark, blow up in Sheerness harbour, from an error in the magazine. Not enemy action.

Francis George Gray
Died 24th October 1918. Francis was the second of three sons of George and Mary Gray, who lived at Cherry Trees in Wheathampstead. His dad was a railway labourer, farm labourer and later a gravel digger. Francis became a domestic coachman and in 1899 married Florence Kate Burgin in Hemel Hempstead and moved to Bovingdon, where in 1911 they are found living at Green Lodge Stables with their children Albert, aged 10, George, aged 8, and one-year-old Marjorie. Name to be added to the war memorial.

Murray Walter Harrison
Died  11th April 1915. He was born at the Folly. In the  1911 census Murray, then 18 years old, is lodging in High Street, Bedford, and has a job as a draper’s shop assistant. Name to be added to the war memorial.

Bertie Lawrence
Listed on the window as H. Lawrence. “H” for Herbert which was never Bertie’s name. He died on the third day of the battle of the Somme 3rd July 1916.

George Minal(l)
Died 29th March 1918. Son of Edward & Elizabeth Minall of 49 New Farm, Station Road, Harpenden. He is not on the Wheathampstead memorial as he is listed on Harpenden’s War Memorial.

Albert William Odell
Died 23rd September 1917. Albert was just 21 when he was killed on September 23rd 1917, when 12th Battalion was involved in the Battle of the Menin Road Bridge.

Cyril John Pearce
Discharged in June 1916 after a medical board declared him “medically unfit”. Died 3rd October 1916. He was 24 years old. Name to be added to the war memorial although he was technically not a soldier at that time.

Horace George Wilson
Died 31st July 1917. Married wife Louisa in Paddington, London, in 1906 and they had a son, Edward George, aged 10 and daughter Elsie Louisa, aged 8, living at The Hill, Wheathampstead when he died.

More details and picture of the above names are available in the book “More Than Just a Name” by Terry and Margaret Pankhurst. This tells the stories of all the soldiers of both World Wars in the parish of Wheathampstead Hertfordshire. Available from Terry Pankhurst at,     terence.pankhurst@btopenworld.com 243 pages, mostly colour, price £15.