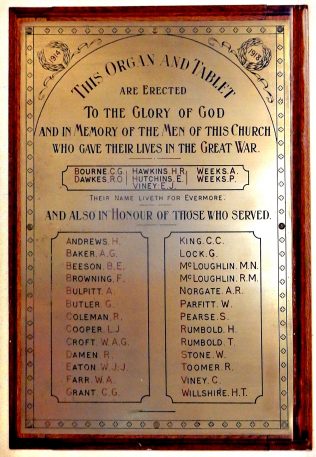 This Organ and Tablet

To the Glory of God

and in Memory of the Men of this Church

who gave their lives in the Great War.

Their Name Liveth for Evermore

and also in Honour of those who served

Comments: He was the only son of William and Lilian Bourne. In 1901 the family were living at 4 Windsor Terrace, Old Winton Road, Andover. His father William had been born in Salisbury and worked as a builder’s foreman. Lilian had been born in the village of  Amport, near Andover.

By 1911 the family had moved to 6 Laurels, Junction Road, Andover and father William was a clerk at the builders merchants. Clifford enlisted for the forces at Andover.

Comments: He was born in Andover in 1890, the son of Charles and Ellen Dawkes. He was one of five children. His father had been born in Vernham Dean, a village near Andover and worked as a railway porter. His mother worked as a domestic servant.

The family first lived at 5 South Street, Andover but in the 1890’s moved to 14 East Street in the town. Robert attended school in Andover and then followed his father into work as a railway porter.

In 1901 his father died (aged 57) and his mother continued to work in domestic service.

At the beginning of the war he enlisted at Andover on 1st September, 1914.

Comments: Henry was the eldest child of Frank and Alice Hawkins. The family of 3 children lived at 39 South Street, Andover and Frank, who was born in the town, worked as a blacksmith. Alice came from London.

In 1911 Frank was working locally as a shoeing smith. Henry went to school in Andover and then started work as a cow boy in a dairy in the town.

Comments: Edward was born in Andover in 1894, being the second of 5 children born to Edward and Kate Viney, who were also born in the town. Father Edward worked as a house painter and the family lived at 67 London Road, Andover.

By 1911 the family had moved to 2 Norton Villas, Old Winton Road in Andover. His father was still working as a house painter but, following school, Edward had a job as a porter in a local drapers store.

Comments: Arthur was born in Upper Clatford, a small village a few miles from Andover. He was one of 10 children. In 1901 his father Charles Weeks was a Gardener’s Labourer and the family lived in the Gardener’s House, being part of the estate of the grand residence of Red Rice House some 2 miles from the village. Charles had also been born in the village of Upper Clatford, his wife Elizabeth Jane coming from Dunley, a village some 6 miles north of Andover.

By 1911 the family had moved the short distance back to the village of Upper Clatford where Charles worked as a nursery gardener, at this time Arthur attended the local village school. He enlisted at an early age and died of wounds suffered fighting with the regiment in Flanders at the age of 19. At the time of his death the family had moved into the town of Andover and lived at 18 Queen’s Avenue.

Comments: Percy was born in Upper Clatford, a village a few miles from Andover. His father, Robert Weeks, had been born in the nearby village of Fyfield and in 1901 was working as an insurance agent for the Refuge Insurance Co. His mother, Kate, was from the village of Sutton Scotney in north Hampshire. Percy was one of 13 children and the family lived at 5 Wellington Terrace, South Street, Andover.

Percy joined the Royal Navy soon after school, working as an officers’ steward, serving on Victory I, Ariadne and Argonaut. In 1911 his father was working as a foundry painter and with the remaining 11 children lived at 24 Anton Terrace in Andover.

At the outbreak of war Percy enlisted in the Hampshire Regiment and was killed at the battle of Ypres. In his will he left £14. 17s. 9d to his mother Kate.