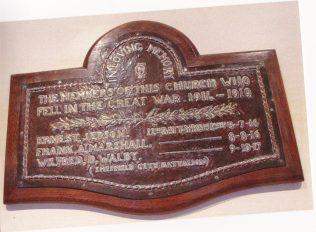 Greenhill Village is now part of Sheffield, but at the time of the 1912 Sheffield Directory it was in Derbyshire and comprised 52 houses. In 1917 the church had 21 members. The memorial plaque is made of brass treated to look like leather. It is on a dark oak base and hangs in the church porch. It lists the three men who died during the First World War, all of whom were in the 12th York and Lancs, otherwise known as the Sheffield City Battalion, one of Kitchener’s ‘Pals Battalions’.

Ernest was born at St Phillips, Sheffield. He died of wounds, age 22, on 3rd July 1916, having taken part in the first day of the Somme attack on 1st July. This was probably at Serre where the SCB were engaged. He is buried in Etretat churchyard in Seine-Maritime.

Frank was born at Sharrow in Sheffield. He was killed in action on 8th August 1916. The SCB were in the front line on 4th August in the Neuve Chapelle campaign. He is buried in the St Vaast Military Cemetery at Richebourg-L’Avoue in Pas de Calais.

Wilfred was born in Nottingham in 1893. He took part in the 1st July attack on the Somme, but died of wounds on 9th October 1917, age 24, in the Vimy Ridge offensive. The SCB were in the front line during the first week in October and had been subject to several bad gas attacks. Wilfred is buried in the Aubigny Communal Cemetery in Pas de Calais. 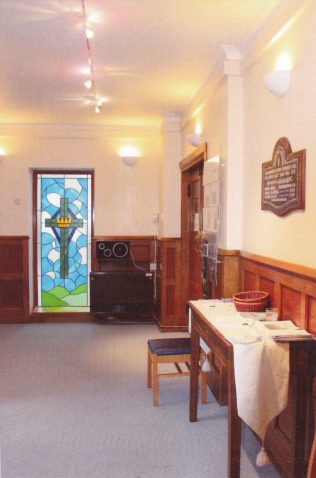