Renewal of the Eastbrook Hall 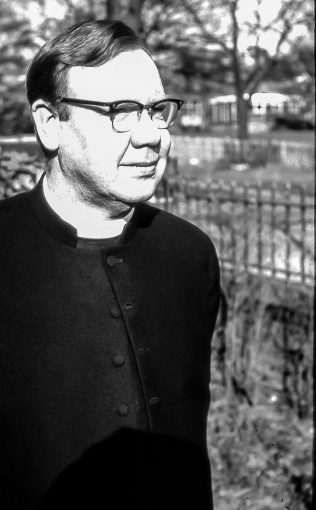 Central Halls were not held in high esteem by everyone, in spite of the Church setting up the City Centre Committee, which was to give some importance to mission work and the plea made in 1964 by the Rev. Ronald W. Frost, B.D. ” A Plea for Central Halls”, there were still both Ministers and lay people who seemed to be jealous of the special place for central halls.  With the proposed renewal of the Eastbrook Hall, there came difficulties from other District Ministers.  This led a very upset Rev.R. K. Walker to make a statement re. the re-development of the Eastbrook Hall in the evening service of 5th May 1968.  Mr. Walker first decided not to preach at this evening service but make his statement instead, he was however persuaded to preach, and to make his statement before the sermon.

The statement made by the Rev. R. K. Walker in the evening service of 5th May 1968 was as follows:

“Yesterday was the representative session of the West Yorkshire Synod,  It was held at Elland, and late yesterday afternoon three Methodist Ministers; the Rev. Lesley Sexton, the Rev. Martin H. Yeomans, both of Huddersfield and the Rev. Trevor Dale of Undercliffe launched a very Viscious attack against the renovation scheme of the Eastbrook Hall.  They did not choose to speak to me privately about it, they waited until there were representatives from three newspapers present, and then said what they had to say.

I found it very distasteful; I found it very hurtful; I have often met these men; I have served with them on many committees; I spent the whole of Tuesday afternoon with Martin Yeomans: but none; could say to me privately what their intention was.

All of us in this serious business of living get hurt, and I am hurt:  I am hurt for you.  There are some people in this congregation who have put their holiday money into the renovation scheme of the Eastbrook Hall and will spend their holidays in Bradford because of it.

Little knowledge is always a very dangerous thing, but I am grieved to think at this particular time when I have sent out an appeal to the City for help that three Methodist Ministers should feel it right to act as they did.  I would not have mentioned this to you:  I carry many grave sorrows in my own heart, and no one ever knows, but I am fearful of what the Yorkshire Post may say tomorrow morning.

Providentially they may be no comment, but if there is a comment you will know what it is all about.  This week on Thursday one Bradford firm sent a promise which amounted to over £1000.  This week on Friday I received anonymously £250 and another cheque for £500.  Yesterday morning I received £55.  I tremble to think what will happen if the newspapers represented at our Synod carry this harsh news.

I must tell you that the Synod voted in favour;  in our favour;  in favour of the continuation of our work.  But I must warn you that there are people about who don’t believe in it.  I depend upon the City for £15000, if what these three men have done prevents that from happening then the scheme will be curtailed.  I cannot spend money that I have not received.

It was Shaftbury; Lord Shaftbury who said – prepared as I am I am oftentimes distressed or puzzled by the strange contrast I find – support from infidels, opposition from religion.  It was William Booth said ‘The day has gone when the police and Levite are content to pass by the wounded man, they must lead tough now, turn back and punch the head of any good Samaritan who dare come to the rescue.

I want you to know that the fire of my resolution to make Eastbrook young again was no flickering candle to be blown out by mere hostility.  I came to Eastbrook Hall at the call of God to bring to pass the alterations, The Renovation, the renewal we need.  It is still my belief that this old hall with all its ancillary premises will be made young again, and I believe that God will make the way clear.

So don’t be down hearted if tomorrow there is a report in any newspaper which may be disheartening to you, as it will be to me, I believe that we stand together in the great resolve!

To turn now to the subject for this evening ‘Prison taught Me’ .