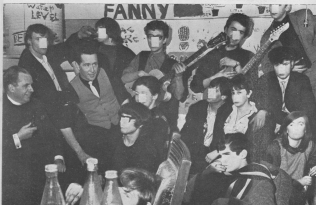 By the time the Eastbrook Hall Mission Report for the 1965 Anniversary had been printed, yet another new piece of youth work had started. By the hard work of the Rev David Copestake and the encouragement of Mr. Thewlis, this work became known as ‘Dave’s Cave’.  This work was at the forefront of the evangelistic enterprise of the Eastbrook Mission. It was a club for ‘Junkies’ – teenage drug-addicts and their friends.  Addiction to purple hearts, Benzedrine etc. was much more widespread then than many people could imagine.  One of the cellars was converted into a 60’s coffee bar, ‘Music Hire’ of Leeds had given the Mission a juke-box, an automatic coffee-machine was installed and the young people themselves decorated the cellar, which became known, after the Rev. David Copestake, as ‘Dave’s Cave’.  About sixty young people used the club on a regular basis.

As with all work there was both joy and sorrow.  Sorrow when one of them got into trouble with the police, joy when one asked for help and was making great strides to improve themselves.  There was joy when quite a number of them started to come to evening service.  There were times when they make their presence felt!  Eastbrook used to have printed hymn sheets for the evening service, and there was one occasion when Mr Thewlis had just started to preach and paper aeroplanes arrived into the pulpit from the side gallery.  That became a sermon illustration on a number of occasions.  There was another occasion when Mr Thewlis had again started to preach and the alarm clock in the pulpit went off.  Although many of us had seen this clock on the table in the pulpit not many had realised before this time that the clock was in fact an alarm clock; we knew after that sermon there would be another sermon illustration for Mr Thewlis.  There was one occasion when they became rather noisy in shouting their encouragements to David Copestake when he had read a lesson in the service and Mr Thewlis felt the need to ask for  better behaviour: that request was only required on one occasion.

The Cave was open five nights a week, and whatever duties David Copestake had during an evening, he would try to get into the Cave before it closed for the night.  He went in to find if any were missing and if he was worried about them he would then go around the local police stations to see if they were in trouble.  He would still be in the office at 9.30am the following morning.