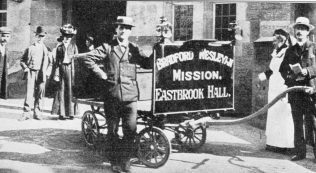 The Rev. Maurice Barnett wrote in the 1951 Mission Anniversary report:

“We are on the march to the people. However busy the inner life of our church has been, we have never been too busy to care for  ‘those who are without’. Thousands of modern handbills about our work and witness have been distributed to people in the city streets. Through storm, wind, rain, and snow we have gone to the people in public houses, cinema queues and dog tracts. In the open-air during the long summer evenings we have witnessed to some of the largest crowds on Broadway Car Park.”

The speaker would stand on the old cart.