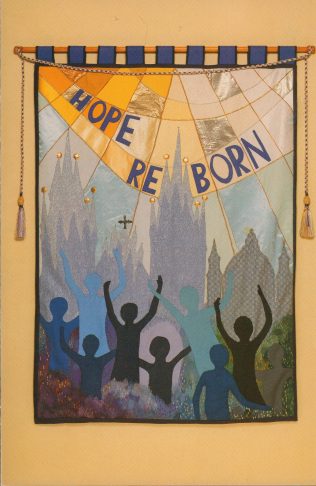 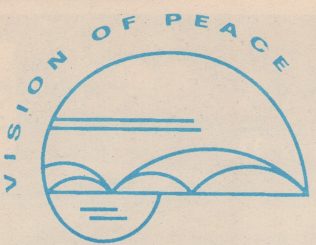 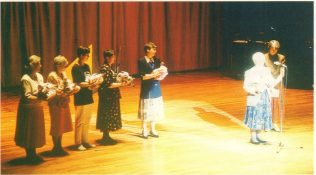 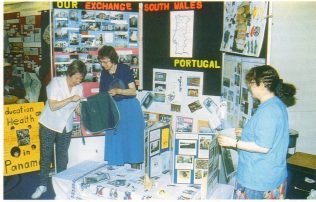 zoom
Stalls at the 'Vision of Peace' Day, Nottingham
'Weaving Network' produced by the Women's Network of the Methodist Church

The ‘Vision of Peace’ programme was launched in 1993 with the aims:

The programme encouraged each District to focus on both an overseas country and a home issue. They were encouraged to learn about that country’s life and culture, make connections and friendships wherever possible and to learn what the desired vision of peace looked like and also what was destructive to that peace. Alongside this a study of a local issue took place and these ranged from support of local hospices, women against pit closures, homelessness, special care baby units and women and disability.

The programme culminated in a national celebration: The ‘Vision of Peace’ Day was held on 9th June 1994 at The Royal Centre, Nottingham. The centre was filled with lots of colourful and informative displays and banners featuring countries such as Panama and Costa Rica, China, Haiti, Bolivia, Peru, Mali, Sudan and issues such as pollution, women’s refuge, rural stress, child abuse, HIV/Aids, survey of provision of care for the elderly and homelessness.

“The enthusiasm and dedication shown by so many in the search for a vision of peace for our world has been wonderful.”

The London North-East and Cumbria Districts, upon hearing of mothers in Haiti making soup from mud to feed their children, raised funds to buy seeds and tools.

In the Philippines children enjoyed receiving a consignment of simple reading books.

At the Evangelical School and Home for Girls in Ramallah in Palestine girls became the proud owners of new red uniform cardigans.

Part of the ‘Vision of Peace’ event was to hand over a petition campaigning against the sexual exploitation of children. This came about as a result of a resolution by the World Federation of Methodist Women (WFMW) European area seminar to call for a concerted international effort to tackle the cause of child abuse, prostitution and pornography. With 70,000 signatures, the petitions were fastened with rosebuds which was a symbol of all the children whose lives had been nipped in the bud as a result of sexual exploitation. The petition was presented to Dr Edith Loane, President of the WFMW and was later delivered to 10 Downing Street.

A new hymn was written to accompany the ‘Vision of Peace’ programme by Fred Pratt Green, click here to see the words.

Do you remember the ‘Vision of Peace’ day? Did you attend? Share your memories below.