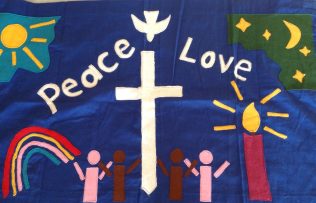 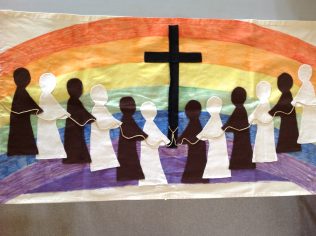 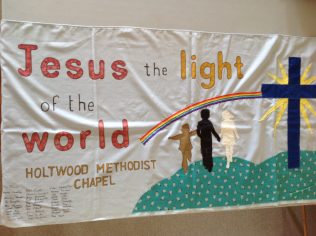 The 16th June 1990 saw 4,000 men, women and children descend on Methodist Central Hall and Kennington Park to stand in silent solidarity with their brothers and sisters of South Africa, both black and white. The title ‘Over the Rainbow’ was chosen for the day of celebration because of its connotations of covenant, promise, hope, and colour; of justice, love and peace for all.

Members of a Women’s Network Working Party met in September 1988 to watch an amateur video made by The Black Sash Movement in South Africa. The film called the ‘The Ribbon’ described how black, white and coloured South African mothers, concerned for the welfare of their children, came together to act. They made panels of ribbon which were displayed together as a silent protest against injustice, and showed how women were working together to overcome the barriers and suffering of apartheid. Many of the panels of their Ribbon were destroyed or confiscated by the police.

Network wanted women in the Methodist Church in Britain to join together and create their own ribbon as a sign that they believed in the need for justice and peace in South Africa, thus creating a visual expression of their love and concern.

The information leaflet produced by Network for the event described the vision as this:

‘Network continues to develop ways of relating to women of other continents as well as our own.

We have felt drawn to the voices of black and white women in South Africa, working together to secure a positive future for their children, and supporting one another through the daily indignities that living under the system of apartheid makes inevitable.

Christ promises us all ‘Life in all its fullness’ – a gift for all humankind and so the challenge comes to each one of us to proclaim that gift to others and to denounce all that stands in the way; in this case – the injustice of South African life and the resultant powerlessness, inequality and oppression for the majority of the population.’

‘Over the Rainbow’ took place on Soweto Day; another poignant reminder that peace was desperately needed in South Africa and due to the popularity of the event two celebration services had to be held at Methodist Central Hall. Thousands of people gathered to share in singing, drama, mime, prayer and celebration. Surrounded by panels of the beautifully crafted ribbon the ‘rainbow people’ were invited to share in a piece of drama which highlighted the ugliness of the world and the disharmony caused when we side with people of our own colour and forget the covenant we make with God that we are all one people, brothers and sisters in Him.

‘The Rally in Central Hall was good, stimulating and worshipful, leaving us in no doubt that it is our Christian duty to support the abolition of Apartheid.’

The vigil in Kennington Park saw the ribbons made by different churches and Circuits around the Connexion being connected together all starting from a cross in central position. Thousands stood in silence for an hour long vigil holding ribbons which carried messages of hope, justice, love and peace.

Joanna Magoba, wife of Rev Dr. Stanley Mogoba (The Presiding Bishop of the Methodist Church of Southern Africa) said, ‘The ribbon was encouraging, challenging, even painful. It touched my heart. The pictures will stay in my heart.’

‘It was truly a celebration from start to finish, and that sentiment has been echoed by young and old alike – no grumbles, no complaints, just a feeling of what a tremendous day we spent together with the whole of the Connexion and with the women of South Africa.’ [Above quotes from the Magnet Special Edition for Over the Rainbow Winter 1990/91]

After the celebration, panels of the ribbon made their way across the Connexion and across the world – to the Black Sash Office in Johannesburg, to America, Canada, Brussels, Jamaica, Zimbabwe, Sri Lanka, Kenya, Nigeria, New Zealand, Ghana … and everywhere in between. The message of love and hope and solidarity was taken to all four corners of the world.

The Ribbon was also taken to the Methodist Conference in Cardiff in 1991. Women’s Network held a picnic in the grounds of Cardiff Castle and then processed through Cardiff, led by Anne Knighton, to St David’s Hall with the pieces of ribbon singing ‘We are marching in the light of God’ as they went. Ruth McGregor, one of the event coordinators, commented in Magnet that during the ten minute silent vigil that was held one passer-by remarked, “This is nothing to the situations that women in South Africa have to face in their struggle for justice”. She remarked that through that small exchange they had been able to put themselves in South African women’s shoes; facing ridicule and unjust treatment whilst protesting peacefully for a more fair society. [Magnet, Autumn 1990]

Stella Bristow wrote in the autumn 1990 edition of Magnet: ‘It really was a memorable day for Network which will long be remembered, I’m sure, by all who came. Nearly 4,000 people shared in a colourful, thrilling and stimulating event in Central Hall, Westminster, and then, in contrast, stood shoulder to shoulder in a public park holding ribbon banners expressing solidarity with their sisters in S. Africa in their struggle against apartheid. The silent vigil was tremendously moving and a very powerful witness, the full significance of which we cannot measure. And this is not the end. There truly is a crock of gold at the end of the Rainbow.’

What is The Black Sash Movement?

The Black Sash Movement was started in 1955 by white middle-class women as the ‘Women’s Defence of the Constitution League’. It was born out of a concern that the government wanted to change South Africa’s constitution. The women continued to protest on issues which affected the individual’s human rights and during the violent years of apartheid the women stood in silent protest with their placards day after day. They established advice centres which offered free paralegal advice to all no matter the colour of their skin. When apartheid ended in 1994 The Black Sash Movement changed from a protest group into a professional non-governmental organisation and still works for the betterment of individuals in society today. [Information from http://www.blacksash.org.za/]

Whilst at the Methodist Women in Britain conference in Swanwick we collected items to become part of a new Methodist Women Collection. Among some items from a lady called Glenys Smith I found the following poem written after the Over the Rainbow celebration.

‘What a memorable day it turned out to be

As we made our way to the Big City

For a time of Network Celebration,

We found our way to Kennington Park.

The feeling of oneness soon made its mark

As we searched the site for our District’s tree,

Oxford and Leicester, so we’re twenty-three.

As we strolled gently around the grounds

It was a joy to see the sights and the sounds

Of friends meeting friends from other places,

Handclasps and hugs and smiling faces.

As the Ribbon was joined and we formed a star

We saw the support from both near and afar.

From Cornwall to Shetland and all in between

It suddenly became for me a most moving scene.

“Hands”, “Rainbows” and “Crosses”, not forgetting the “Dove”,

“Freedom” and “Justice” – these were the dreams

In the symbols that were chosen in all of the themes.

So on then we went to the Central Hall

Where our Circuit’s banner was high up on the wall.

With their many splendored outfits of colours so bright.

In music and mime, in speeches and songs

We were challenged to help put right the world’s wrongs.

Like colours, we each separately have something that’s right

But blended in harmony – a fantastic sight.

We came home rejoicing with many a tale.

Best of all that the Good News is not for sale

But by God freely given for you and for me

Jesus is with us – hope for eternity.’

Did you take part in the Over the Rainbow celebration? Did you help to make a part of the ribbon or did you go to London to stand and hold it? Please share your memories of this event in the comments.