You are here: HomenextTopicsnextJMAnextJMA Golden Jubilee 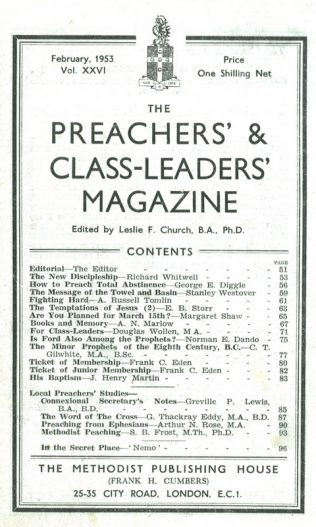 I found an article in the Preachers’ & Class-Leaders Magazine from February 1953 regarding the J.M.A. Golden Jubilee celebrations which I have transcribed below.

ARE YOU PLANNED FOR

I hope so, because that is a day of great opportunity. Throughout the connexion we are asked to celebrate March 15th as J.M.A. Sunday, a part of the 1953 J.M.A. Jubilee Year. Nor is this event one in isolation from the work of the Methodist Church, but it is an integral part of the year of evangelism to which our people have been called; for the J.M.A. Golden Jubilee celebrates the outcome of our S.S. work in the past and offers an opportunity for the children to show their love for Jesus Christ in service for others, today and in the future.

On this day of celebration with the children we want to bring before the adult congregations of our churches the work which has been accomplished by the J.M.A. during the last hundred years, and particularly during the years since 1903 when the J.M.C.D.S.O. medal, awarded to children collecting £5 and over in a year, was first presented. What are the facts we want to present? In this country there are 70,000 Sunday school children who by weekly collecting in 1951 raised £174,324 for works at home and overseas. During the last 50 years the children of Methodism have collected more than £23/4 million sterling and made possible at least one-third of our work overseas. This is a tremendous fact which is not generally realized. But this is not the most important part of J.M.A. work. Today there are many of our 600 missionaries overseas and hundreds of church workers in this country who gratefully acknowledge that they received their first missionary interest during their childhood in the J.M.A. You can perhaps say the same.

The J.M.A. children are learning to know and understand their contemporaries in other countries to pray intelligently for other people, to serve and to give systematically, and to take responsibility in the life of the Church. This training is sure to bear good fruit in the future.

How can we put this over in a service of worship? The theme of the J.M.A. Sunday is that of thanksgiving and dedication. Circumstances will decide whether a children’s or adults’ service is held, but for both the message might be that of the great possibilities, through the power of God, of things which to the world are weak and insignificant. “There is a great lad here,” Said Philip, an Christ used that lad and his gifts to meet a great need. In 1836 the Church at home faced the need for trained and far-sighted leaders to take local responsibility. William Shaw, home from South Africa, addressed a large company and pointed out the extreme financial need caused by lack of vision of the people. “Will you consent that the missionaries be abandoned?” he pleaded and immediately a little man jumped up and shouted “No, no, never, never!” That man, Joseph Blake, a Harrow shoemaker, went home and in prayer heard the command of God, “Train the children”, and realized that in this way future church leaders would be assured. The children were given collecting books in which to write the names of eight contributors of a half-penny a week. But Blake’s emphasis was not on the money collected – “It is the future”, he said, “we regard as all-important, when many of these trained collectors will be converted to God and fill the various offices in our Church”.

It was a little beginning but it was the work of God, and today children in every part of this country, and in Africa, the West Indies and the Church of South India are joining in this great missionary adventure which we believe can be the means of bringing them into fuller knowledge of Jesus Christ as their personal Saviour and the Father of the whole world.

Will you lead your congregation in thanksgiving to God for this opportunity amongst the children?