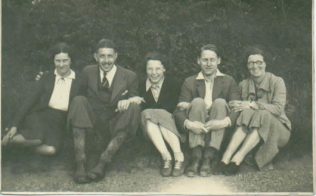 My grandad, Albert Henry Nunn (1912-2000) was the son of a Wesleyan choirmaster – in fact, his parents had met through the choir as his mother was a chorister. Albert became a Methodist lay preacher in the 1930s, on a circuit which covered the south-east of Essex – he himself was living in Southend at the time.

The photo shown here was taken sometime in the 1930s on a Sunday school outing. They seem to be enjoying themselves! I don’t know who the other people are in the photograph, but presumably they all attended the same chapel as my grandad did.