You are here: HomenextChapelsnextAround the WorldnextGordon Town Methodist Church, Jamaica 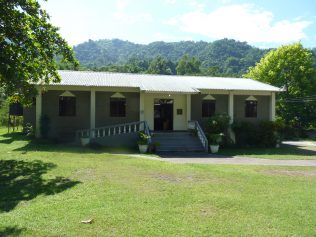 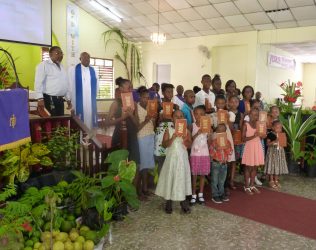 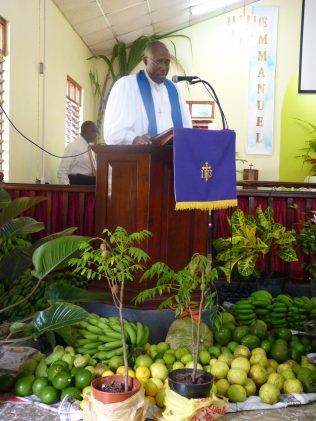 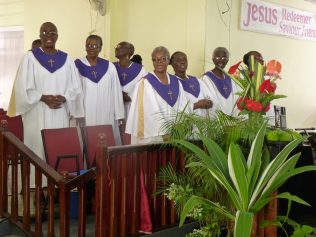 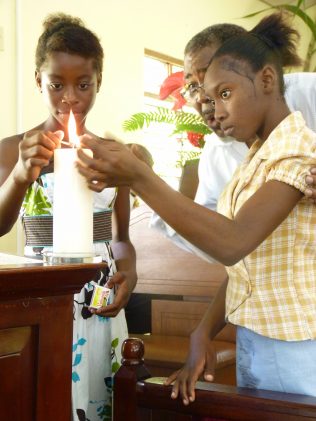 Gordon Town Methodist church nestled at the foot of the Blue Mountains, in St. Andrew, Jamaica was the venue of a unique ‘connection’ on December 1st, 2013. On this Sunday which was celebrated not only as the first in the Advent calendar, Harvest Sunday and Communion Sunday, a gift of Good News bibles and a Peace candle donated by Bromley Methodist Church was presented to the congregation.

During the service, which lasted for four hours, the gifts from Bromley Methodist were acknowledged by the Superintendent of the Sunday school, Brother Jackson. Each child in the Sunday school was presented with a bible and two of the students lit the Peace Candle.

The sermon delivered by Rev. Dr. George Mulrain, Superintendent of the Providence circuit, Methodist Church of the Caribbean, was in recognition of HIV/AIDS week, and addressed what the attitudes and behaviours of Christians should be in their, approach and treatment of victims affected by AIDS, as the Caribbean is the region with the second highest incidence of HIV/AIDS in the world.

The congregation of Gordon Town, so called after one of Jamaica’s National Heroes, George William Gordon, are a mixture of farmers, teachers, public servants, and youth as well as elderly and retired persons.  The church also boasts a small choir led by organist Brother Donovan Rookwood which has been honoured among Methodist churches in Jamaica for the standard of its music and the quality of its voices.

Origins of the Peace Candle

In 1986, a group of American Christians went on a visit to the Churches of Russia. After a service in an Orthodox church, an old woman pushed a 3 rouble note into the hand of an American minister, the Revd. Dr. Blair Monie, gave him a hug, and asked him to use the money to buy a candle and light it at every service in his church as a symbol of PEACE.

That note represented a lot of money for the old woman. Fortunately an interpreter heard her and translated her words for Dr. Monie. His Church, the First Presbyterian Church, York, Pennsylvania, readily agreed to use the money to buy a candle in a glass holder, keep it on the communion table, and light it at every service of worship.

In the autumn of 1986, that Church in Pennsylvania bought many candles in glass holders to send to other Churches, asking that they be lit as a sign of PEACE. Two people at that Church, who had previously been members of a United Reformed Church in Sutton Coldfield here in England, sent a candle in a glass holder to their old Church. A candle has been lit in that church as sign of PEACE at every service since Peace Sunday in 1987.

During the ‘Week of Prayer for Peace’ that same year, that Church bought 100 candles and glass holders which members then purchased and sent to various other Churches where they had contacts. A few years later we at Bromley Methodist Church received such a candle which we light and place in a prominent position at every service of worship as both a sign of peace and as a reminder to us to pray for peace.