Men from the National Children's Home and Orphanage Crowthorn, Edgworth 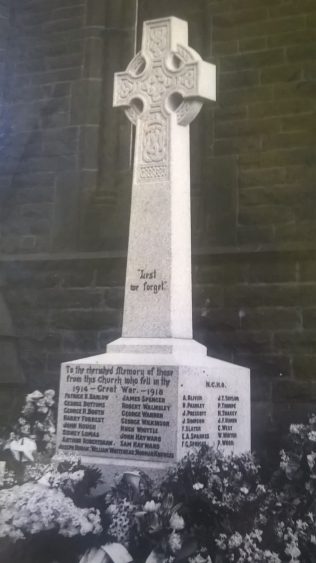 On the war memorial at the Methodist Church, Bolton Road, Edgworth there are 28 surnames and initials which are listed as “NCHO”.

These are men who would have spent some time at the National Children’s Home and Orphanage at Crowthorn, just outside the village of Edgworth. The identities of these men were unknown. However, by looking through census records information began to emerge.

It was discovered that at least 17 of the names related to men who fought with the Canadian Expeditionary Force. It was common practice at the time to send both boys and girls to Canada to work as indentured domestic servants and farm labourers. Many charities were involved in this, including the Methodist Children’s Home and Barnardos.

The Methodists did their best to vet the homes the children were sent to and many of the children were taken into families and treated well, although inevitably there were some instances of abuse. Despite the fact that only 2% of these children were orphans and had parents and siblings in the UK, some charities discouraged contact with their old families as it was thought this would enable the children to adjust better to their new lives.

A possible motive for enlisting in the forces was that the men had the opportunity to return to the UK where they could try to find relatives. Close to 100% of men who had been sent to Canada and were eligible to fight enlisted. More information is available from the British Home Children Advocacy and Research Association (http://www.britishhomechildren.com).

Some also signed up with the British forces and their stories are included. It has not been possible to find information on everyone, but the search is ongoing.

The PDF files at the end of this page are the biographies of the 21 (of 28) men identified to date:

Sadly no information has been discovered for the following names:

The History of the Children’s Home

Dr Thomas Bowman Stephenson, a Methodist Minister from the East End of London had been involved in the creation of a children’s shelter from 1869. However, he longed to move the children away from the smoke, dirt and vice of London. In reply to an advertisement placed in the Methodist Recorder he received a message from Mr James Barlow of Edgworth to the effect that he would offer them the Wheatsheaf Inn at Edgworth, a notorious den of iniquity which he wished to close, along with 80 acres of land and a sum of £5,000. The first children arrived in 1872.

“Eventually the home would have its own farm with cattle, a dairy, bakery, laundry, blacksmiths, carpenters and a clog maker’s workshop. The stone-built houses where the children lived would span outwards from the Wheatsheaf building down Moorside Road and Broadhead Road. The houses still stand and from the outside are recognisable to returning children.” http://www.theboltonnews.co.uk/news/2245611.0/

The home became residential accommodation for children with Special Needs and was closed in 2002. Records are in the archives of Action for Children.

Further information can be found in Edgworth to Crowthorn – the Story of a Lancashire Children’s Home by Anita D Forth, available from Bolton library.

If you have any further information about any of these men, or would like to know more about The Barlow WW1 Research into men from Edgworth, Chapeltown and Entwistle please contact Linda Spencer at lespncr@aol.com

All text, including biographies, is copyright of The Barlow WW1 Project Group, www.thebarlow.co.uk.