You are here: HomenextPeoplenextMethodist MinistersnextFrancis Asbury and related topicsnextWhat Does Francis Asbury Mean to America?

What Does Francis Asbury Mean to America?

Why so much love for this 18th-century, British Itinerant? 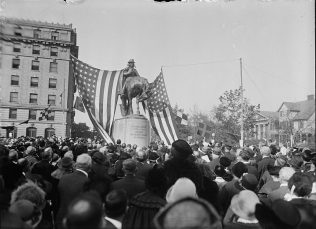 This page draws from the recently published page at The Asbury Triptych Series website. You can read the article and see the pictures in their entirety here.

In America, there are hundreds of churches with the name, Asbury, attached to them. There are dozens of elementary, middle, and high schools named after Francis Asbury. Asbury Park, New Jersey, is named after the British itinerant preacher, as well as Asbury University in Wilmore, Kentucky. Add to this list numerous statues, works of stained glass and historical markers along the roadsides throughout the entire country. Why so much attention and honor paid to an 18th-century, British itinerant from the largely unknown blacksmithing town of Great Barr in the West-Midlands of England?

The 18th-century, British itinerant preacher, sent as a young man by the venerable, John Wesley, to the virgin forest known as the American Colonies can be considered the George Washington of American Christianity. Although Francis Asbury did not command a military force, he commanded a spiritual force, a Biblical Cavalry if you will, which transformed the hearts and souls of many, almost an entire nation by most accounts. The church he inherited upon his arrival barely contained 300 members. By the time of his death, the Methodist Church he birthed numbered more than 214,000 members.

This spiritual force also instilled greatness upon a land at a time in search of its own identity as a nation. Twenty-six,-year-old Francis Asbury encountered a continent of peoples, peoples from Europe and Africa, as well as many nations of the American aborigine. Much in the same way that the young Biblical prophet, Elisha, inherited his ministry from his mentor, Elijah, Francis Asbury inherited the efforts of ministers who went before him. It is the opinion of many that Francis Asbury was an extension of the works of men like David Brainerd and George Whitefield.

Wednesday, October 15, 1924 (108 years after the death of Francis Asbury) at 2:30 pm, several thousand people gathered to view the dedication ceremony of the Francis Asbury Statue in Washington D.C. Dignitaries from the nation’s capital were seated on the white-draped platform. Hanging from left to right around the rear of the wide stage was a pine bough, clearly a nod to the rural travels of Francis Asbury. Several American Flags hung erect in the almost non-existent wind. Even the stillness of the flags urged that Asbury would have enjoyed a few less windy days during his more than 225,000 miles on horseback. At the center of the platform was a wood podium, atop the speaker’s stand a microphone. Standing at the speaker’s stand was President Calvin Coolidge. Within minutes, he gave his famous phrase neatly tucked into his dynamic speech about Francis Asbury, the phrase which many who know of Francis Asbury are familiar with, “He is entitled to rank as one of the builders of our nation.”

President Coolidge’s speech is worthwhile to read. You can do so here. Not only does the speech point to the merits of the ministry efforts of Francis Asbury, President Coolidge’s words go much deeper, ranking Christianity as the main reason for America’s success:

“On the foundation of a religious civilization which he (Francis Asbury) sought to build, our country has enjoyed greater blessing of liberty and prosperity than was ever before the lot of man. These cannot continue if we neglect the work which he (Asbury) did. We cannot depend on the government to do the work of religion. We cannot escape a personal responsibility for our own conduct. We cannot regard those as wise or safe counselors in public affairs who deny these principles and seek to support the theory that society can succeed when the individual fails.”

The statue which was dedicated on that day almost one-hundred years ago is engraved with the following tribute to Francis Asbury:

“IF YOU SEEK THE RESULTS OF HIS LABOR YOU WILL FIND THEM IN OUR CHRISTIAN CIVILIZATION,”

“HIS CONTINUOUS JOURNEYS THROUGH CITIES VILLAGES AND SETTLEMENTS FROM 1771 TO 1816 GREATLY PROMOTED PATRIOTISM EDUCATION MORALITY AND RELIGION IN THE AMERICAN REPUBLIC.”

Finally, on the back of the Francis Asbury Statue are the words which succinctly bring it home, a fitting description of the man:

“THE PROPHET OF THE LONG ROAD.”

For more on the Francis Asbury Statue dedication, click here.

What also made Francis Asbury an American favorite was the fact that he was known by almost everyone in the burgeoning nation. His travels from Maine in the northeast to Georgia in the southeast, from Maryland and Virginia in the east to Tennessee and Kentucky in the west made him a household name. Not only did he preach and teach in these towns, but he also personally spent the night in many of the homes of the faithful in these towns. He never owned a home during his 45-year ministry in America.

Francis Asbury never gave up his British citizenship either.

Despite the fact that at times during the American Revolutionary War with Great Britain, many suspected his ministry travels as spying for the British army. In time, the true sentiments of Francis Asbury’s love for his adopted country became known, as well as his longing to share the Gospel wherever God placed him. The American colonists during the war began to see that Francis Asbury was slowly becoming an American asset, bringing the hope of the Bible to a war-torn land.

There are some who correctly state that if there wasn’t a Francis Asbury, there would be no American Methodism. But there are also many who acknowledge that without Francis Asbury, there would be no American Christianity. Many of the enriching qualities of contemporary American Christianity originated with the efforts of Francis Asbury and the thousands of traveling preachers he pushed to spread the life-giving message of the Gospel. The ideas of small groups, outreach across denominational and ethnic lines, the fight for justice, and the celebration of worship through music are among those enriching qualities which survive and give life to the American church body today. Noteworthy is that these qualities flourished at a time when the faithful believers were pushed to their limits during a war which risked everything they held dear.

Another noteworthy, even ironic twist to the culturally changing efforts of Francis Asbury, is that much of what he accomplished came about in part by the mentoring of the British Methodists, John and Charles Wesley and their band of itinerant preachers who changed the culture for better in England, Ireland, Wales, Scotland, Asia, focusing many on thrift, ending rampant illiteracy, the abuse in prisons, and addiction to gin. These men also, without mistake, influenced America through the mentoring of their young missionary, Francis Asbury.