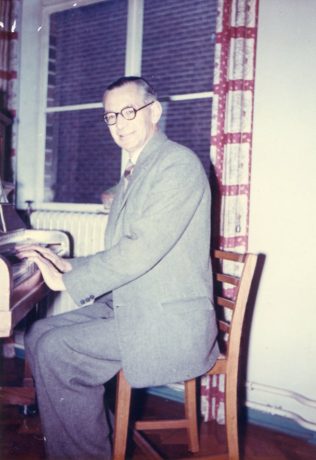 Our small Northern seaside urban chapel, in Scarborough, couldn’t run to a caretaker and thus it fell to the men of the Chapel to keep the boiler going so that the Chapel was warm in winter. It wasn‘t a gas-fired or oil-fired boiler, but a coke-driven one, thus it required plenty of attention both during the week and at weekends. As we lived nearest to the Chapel, any emergencies tended to come the way of my father even if it was not his turn on the roster.  It would not be unusual for him to be up early on a Sunday morning to attend to the boiler before then going out to preach somewhere in the scattered circuit.

…the Church Banker who kept the Collections under his bed!

There were only a few stewards in the congregation amongst whom to spread the duties, such as counting and then banking the weekly collections and any other fund-raising events. The role of banker fell very frequently on my father and, as he was a Head Teacher, banking from Monday to Friday in those days was an impossibility. To my mother’s constant dismay he kept the money in a black tin box (admittedly locked) under his bed until such time as it became possible to get to the bank (i.e. half-term.)  Fortunately the local miscreants were not aware of this treasure trove and its whereabouts!

Our Circuit included not only town churches but also a large number of rural ones in the surrounding villages. Before the days of the car, if there was no suitable bus, then it had to be ‘on your bike’ to get to some of these churches and chapels. So, off Dad would go with his trouser clips firmly fastened.

It would not be unusual when visiting some of the village chapels for my Dad to be greeted by stewards against whom, he had been playing cricket on the previous Saturday. In those days there was no ‘sledging’ from the wicket keepers or slips fielders but there could be a bit of good humour on the cricket field at tea-time if it was known that Dad would be preaching in the local chapel on the following day.

…being the First out-of-towner to be given a Headship

Until his arrival in this northern seaside town in the late 1940s, all Headship appointments had been the prerogative of local teachers.

There was another ‘first’ for him, when he was invited as the first Local Preacher ever to take a service in the town’s most ‘prestigious’ Methodist Church, the pulpit of which had hitherto always been filled by a Minister.

…having a favoured text – ‘But, he was a leper’

My mother and I would sometimes accompany my father on some of his preaching appointments.
I recall two particular themes that he preached on:

(a) ‘Joy’ – he felt that there should be more joyousness (however it might be defined) for Christians;

(b) ‘But he was a leper’ – This was a text (2 Kings 5: v.1) that he used several times (hence a young boy’s ability to remember it!).  Sadly, I cannot recall how he developed this text, except that he drew on the significance of the use of the word ‘but’ not only in Naaman’s time, but also in the present day.

…being not without honour in his own country (a true anecdote!)

Hailing from the West Riding of Yorkshire, my parents would exchange holidays with my father’s brother and family who still lived in a small mining village, and occasionally my Dad would be asked to preach in the local Chapel there. But this final paragraph is not about his preaching…

…When my uncle and aunt came to stay with us we would frequently go to the local Rep. Theatre.
On one occasion there was a farce in which the punch line, repeated quite frequently, was: “If I could stand where Moses stood!” accompanied by lightening flashes, thunder rolls and smoke.

Some two months later we were visiting my uncle and on the Sunday we went to his Chapel: we were in the congregation but my uncle was a staunch member of the choir which sat just behind the preacher.  The fourth hymn, from the old Methodist Hymn Book, was number 649 ‘There is a land of pure delight.’* At the end of the 5th verse, my uncle looked towards my Dad and could not restrain himself from giggling, so much so that he had to sit down (and he was on the choir’s front row!) – for the 6th verse had as its first line:

“Could we but climb where Moses stood!”

(* Note: this hymn was included in Hymns and Psalms, but was omitted from Singing the Faith)